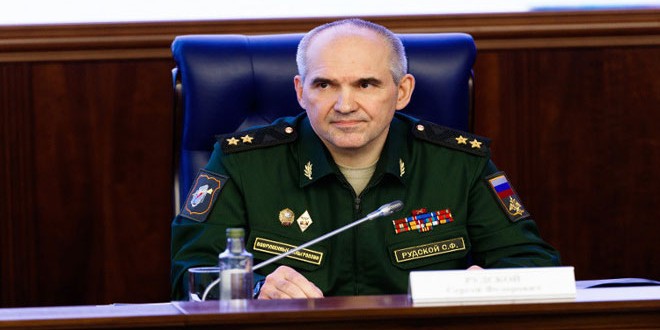 Moscow, SANA-Russian General Staff affirmed on Friday that trucks coming from Turky continue to flow to Jabhat al-Nusra in the northern countryside of Aleppo and Idleb.

In a press statement, Head of the Russian General Staff Main Operations Department Sergey Rudskoy said that northern parts of Aleppo and Idleb bordering with Turkey are the main hot spots “where groups of international terrorist organization Jabhat al-Nusra linked to Al-Qaeda are rampant,” pointing out that the flow of the trucks to these areas coming from Turkey is uninterrupted as they are crossing the border daily loaded with weapons and ammunition.

Rudskoy added that the continuation of sending arms and ammunition to al-Nusra terrorists helped them continue their provocative shelling and launching terrorist attacks on the Syrian army positions.

“Apart from that, Turkish artillery continues to shell Syrian border towns and positions of the Kurdish Protection Units,” Rudskoy said.

He said that Washington acknowledges that the main hotbeds in Syria are located in the areas where al-Nusra is active, adding that a number of the Syrian areas are witnessing an escalation in the situation on the ground due to al-Nusra attempts to foil the cessation of hostilities agreement.

“After taking advantage of the cessation of hostilities and the fact that groups of this terrorist organization are stationed in the same regions as units of moderate opposition, at which Russian Aerospace Forces and Syrian Air Force do not deliver airstrikes – Jabhat al-Nusra has partially restored its military capabilities, replenished its ammunition and weapon stockpiles and launched offensives,” Rudskoy said.

The Russian air force has intensified since May 20 its strikes against illegal oil extraction facilities in Syria and the means of oil products smuggling into Turkey, Rudskoy added.

He said that Moscow and Washington agree that it is necessary to impair the economic potential of the Islamic State and Jabhat al-Nusra groupings, adding that Russia and US are conducting substantive discussions on the expert level.

He reminded that on May 20, the Russian side invited the US partners to pool efforts to deliver strikes at positions of Jabhat al-Nusra and other terrorist groups in Syria.
“The answer we received from the United States, despite the positive assessment of our measures, envisages no joint actions against terrorist organizations, which may entail further escalation of the situation,” he said.

The Russian military official said that although the cessation of hostilities agreement entered into force on February 27th, the terrorist groups located in Eastern Ghouta are still targeting residential neighborhoods in Damascus.
Rudskoy pointed out that groups affiliated to the so called “Ahrar al-Sham” spread in the area surrounding al-Fouaa and Kafraya towns in Idleb countryside in addition to Jabhat al-Nusra terrorists, adding that Hmeimim Coordination Center has repeatedly informed the US about continued shelling on the two towns which had not stopped until Russian Defense Ministry warned that Russia’s military can attack unilaterally the violators of ceasefire.

“Over the past several days alone… the Russian reconciliation center has received applications on the cessation of hostilities from 17 armed groups. These are groups that were to a greater or lesser degree under the influence or control of terrorist of Jabhat al-Nusra,” Rudskoy said.

“The number of towns that have signed the cessation of hostilities agreement is growing. As of today, their number has increased to 122,” he said.

According to Rudskoy, 60 armed groups have declared that they accept the conditions of the cessation of hostilities.

cessation of hostilities ISIS Jabhat al-Nusra Russian General Staff Syria Turkey 2016-05-27
Manar
Share
Previous Bogdanov: There is no alternative plan regarding the crisis in Syria
Next Tens of families start returning to their houses in southern area of Eastern Ghouta-VIDEO