Arab student forum: The Palestinian right of return is sacred 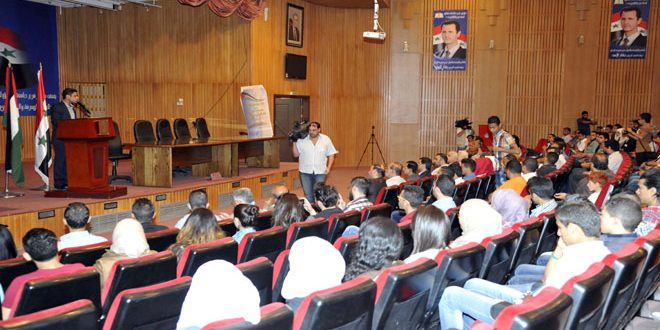 Damascus, SANA – Participants in the Arab student forum for supporting the Palestinian right of return, organized by the Arab Student Organizations’ leadership, affirmed that the Palestinian cause is central for all the Arabs and that the right to return to Palestine is a historical and uncompromised right for the Palestinian refugees.

In a speech during the forum, which was held at Damascus University marking the 68 anniversary of the Palestinian Nakba (catastrophe), Dr. Mutaz al Qurashi, Secretary of Arab Student Department at the university, described the forced displacement of refugees from the Palestinian camps in Syria at the hands of the terrorist organizations as being part of the Israeli enemy’s scheme to push the Palestinian people farther from their homeland.

“The right of return is sacred, and all efforts should be united to support this right at the international forums,” al-Qurashi said.

In turn, Abu Omar al-Masri, member of the Palestinian Central Committee of Fatah al-Intifada Movement, shed light on the legal dimensions of the right of return and called for adherence to the relevant UN resolutions, recalling the sacrifices made by the Palestinian people for the sake of maintaining this right in terms of them rejecting all forms of Israeli attempts at forced citizenship and resettlement.

Khaled Abbas of the Popular Front for the Liberation of Palestine-General Command- said the terrorist organizations’ attempts to drive the Palestinian refugees out of their camps in Syria are part of the terrorism practiced by the Zionist entity to eliminate the right of return to which these camps stand as living witnesses.

He called on all the Palestinian factions to unite and overcome their differences and not count on any agreements with the Israeli enemy.

Nakba is celebrated on May 15 of every year since 1948, when 750,000 Palestinians were expelled from their homes and became refugees in neighboring countries after the Zionist gangs committed brutal massacres that claimed the lives of thousands of innocent people and demolished and destroyed hundreds of Palestinian villages and towns to build settlements in their places.

Arab student forum The Palestinian right of return 2016-05-21
qabas
Share
Previous 5 civilians, including a baby girl, injured in terrorist rocket attacks in Aleppo and Daraa
Next Authorities seize truck loaded with over 25 tons of medical supplies for ISIS coming from Turkey