The army kills over 125 terrorists in Hama, breaks seige on al-Zara power plant 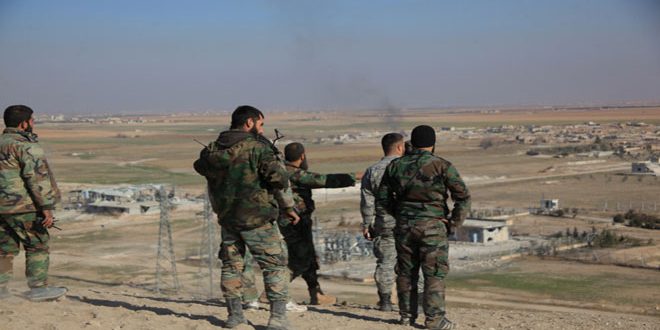 Provinces, SANA- The army foiled on Saturday an attack by terrorist organizations on many military posts in Hama countryside, killing large number of them.

125 terrorists at least were killed from the terrorist organizations of “Jabhat al-Nusra” and “Ahrar al-Sham Islamic Movement” and a number of their machinegun-equipped vehicles were destroyed in the southern and northern countryside of Hama central province.

A military source told SANA that units of the army and the armed forces broke the siege imposed on al-Zara power plant in a special operation, forcing the terrorist groups which are affiliated to Jabhat al-Nusra and Ahrar al-Sham Islamic Movement to withdraw to Harbanafseh town in the southern countryside.

The source added that units of the army established control over all the important positions to the north and the east of the town after killing about 100 terrorists and destroying 10 of their machinegun-equipped vehicles.

In the northern countryside, units of the army, backed by the Syrian army’s air force and artillery, foiled an attack launched by terrorist groups affiliated to “Jabhat al-Nusra” and “Ahrar al-Sham Islamic Movement” on military posts on Ma’an-Tal Bazam axis.

25 terrorists were killed and scores were injured and 6 vehicles equipped with Dushka machineguns were destroyed.

Among the killed terrorists was a field commander at Jabhat al-Nusra terrorist Samir al-Asmar.

Meanwhile, the Syrian Air Force destroyed ISIS terrorists’ positions in al-Shaer field, to the east of Jazal field and Um al-Tababeer area in the eastern countryside of Homs.

Heavy losses were inflicted upon terrorists in personnel and equipment.

In the southern Daraa province, an army unit destroyed in an operation in al-Arbaeen neighborhood in Daraa al-Balad area a command center of Jabhat al-Nusra terrorist organization.

A number of terrorists at the center were killed in the operation.

The Syrian army’s air force launched intensive airstrikes on gatherings and positions of ISIS terrorist organization to the southwest of Deir Ezzor city.

The military source told SANA that several of terrorists were killed or injured in the strikes and a number of their machinegun-equipped vehicles were destroyed, in addition to the destruction of a number of positions including amounts of arms and ammunition.

In a relevant context, SANA reporter said an army unit destroyed a car bomb driven by an ISIS suicide bomber
in the vicinity of Panorama area, southwest of Deir Ezzor city.

Meanwhile, the terrorist organizations acknowledged on their social media pages that the so-called “Commander of the Western Sector in Deir Ezzor city” within ISIS who is nicknamed Abu Khadija al-Masri was killed in the vicinity of al-Tharda Mountain in the southeastern countryside of Deir Ezzor.

Al-Masri also served as the “Chief Official of ISIS” in Deir Ezzor. 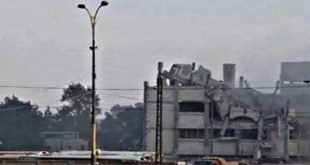