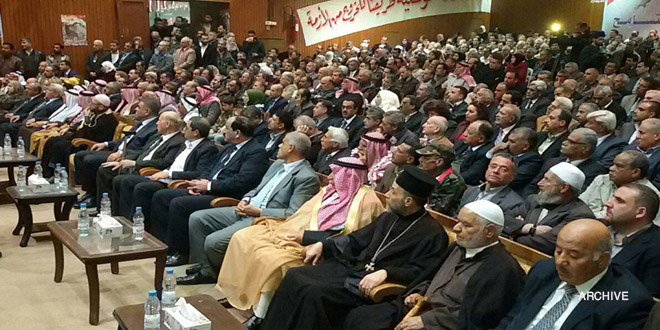 Daraa, SANA-The possibility of establishing a local reconciliation in a number of villages in al-Lujat area in the northeast countryside of Daraa was discussed in a meeting on Wednesday at Daraa Governorate building.

During the meeting which was attended by the dignitaries and figures of al-Sharea, al-Masmia, Shaara and Um al-Qossour villages, Daraa Governor Mohammad Khaled al-Hannous stressed the necessity of expelling foreign militants from the area, expressing the governorate’s readiness to settle the legal status of armed persons from these villages who have not had their hands stained with blood.

Al-Hannous pointed out that the governorate is working on meeting all the service requirements in the villages within the available resources.

For their part, the participants in the meeting affirmed the importance of speeding up settling the status of gunmen from these villages, expressing their willingness to stand by the Syrian Arab Army in protecting their villages and prevent the infiltration of any militants to them.

In turn, members of a delegation from the Russian Center in Hmeimim pointed out that efforts are exerted to accomplish the reconciliation and establish security and stability in these villages, adding that they attended the meeting to listen to the needs and demands of the locals and study the possibility of carrying them out.

During the past few weeks, aid delivered by Russia had been distributed among the locals of the villages and the towns of al-Jbab, Izraa and Qarfa in cooperation with Daraa governorate. 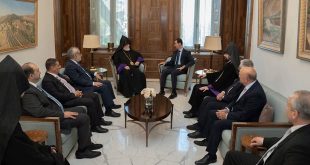