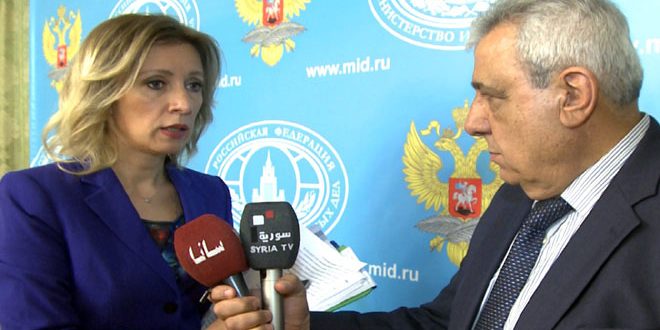 Moscow, SANA- Russian Foreign Ministry spokeswoman Maria Zakharova called on Friday for heeding the demands of the legitimate government in Syria regarding closing the Turkish border and preventing the flow of terrorists into Syria.

In an interview with SANA reporter in Moscow, Zakharova said that there are steps and efforts taken to launch the peace process and to eliminate terrorists. But on the other hand, she added, this route via the Turkish border is a constant reminder that it is impossible to progress in the peaceful efforts as long as it exists.

Zakharova affirmed that there is a fierce media campaign currently waged by the West in order to retain its positions and support those forces it funded which are not interested in the political process which, if sabotaged now, will have dire consequences.

Asked about the role of Turkish, Saudi and Qatari regimes in what is happening in Syria, Zakharova said that regional players are deeply involved and their role is by no means positive, accusing Turkey of dealing debilitating blows to the peace and counterterrorism efforts in Syria.

Zakharova: US unable to force “moderate opposition” to distance itself from al-Nusra

Earlier, Zakharova affirmed during a press statement that the United States has been so far unable to force the so-called “moderate opposition” which it supports in Syria to distance itself from Jabhat al-Nusra terrorist organization.

“Moscow insists on the need of uncompromising fight against terrorists and those who together with them violate the ceasefire regime, in particular such odious extremist armed groups as Ahrar ash-Sham and Jaysh al-Islam,” Zakharova told reporters.

She called for strictly abiding by the cessation of hostilities agreement, pointing out that the main reason behind the current escalation in Aleppo is the provocations of terrorists who attempt to disrupt the agreement which came into force on February 27.

The Russian diplomat said that Russia is exerting immense efforts to consolidate the truce in Aleppo city.

Zakharova pointed out that the so called “moderate opposition” is using the same methods of terrorists in Aleppo where they are shelling residential neighborhoods with shells and rockets to kill and intimidate the locals, adding that terrorists of al-Nusra are exploiting this “moderate opposition” which is supported by US to launch new bloody attacks.

Zakharova noted that Jabhat al-Nusra is trying to make up for their losses in Aleppo, adding that new fighters and weapons are entering Syria via the Turkish-Syrian border.

She also called on the international and regional powers that have influence on the armed groups in Syria to pressure their agents to distance themselves from ISIS and Jabhat al-Nusra and to strictly commit to the truce.

Zakharova pointed out that some media reports about what is happening in Aleppo are biased and based on unreliable sources which she said are blaming the Syrian government for the escalation on the ground.