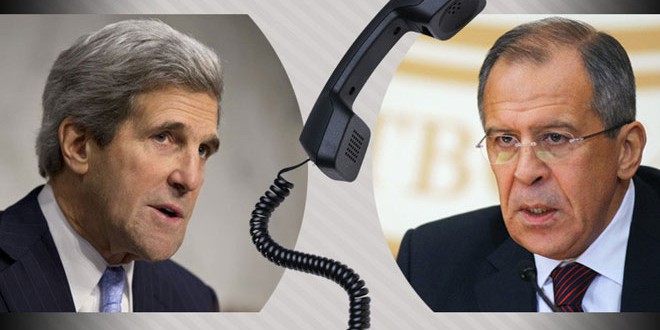 Moscow, SANA- Russian Foreign Minister Sergey Lavrov discussed with his US counterpart John Kerry during a telephone call on Monday the political settlement of the crisis in Syria and commitment to the cessation of hostilities agreement.

The Russian Foreign Ministry said that Lavrov and Kerry agreed on the steps by Moscow and Washington as members in the International Syria Support Group (ISSG), including preparations for the upcoming meeting.

Last week, Lavrov and Kerry discussed means of cooperation between Russia and the United States to consolidate the agreement of the cessation of hostilities in Syria and launching a settlement process to resolve the crisis.

Gatilov calls for direct talks between the Syrian government and opposition

Meanwhile, Deputy Foreign Minister Gennady Gatilov said that his country calls for holding a direct dialogue between the Syrian government and the opposition during the coming round of Geneva talks.

“It is not possible to reach satisfactory agreements except within direct talks between the Syrian government and the opposition,” Gatilov added in a statement.

He affirmed that this depends on the UN envoy to Syria Staffan di Mistura and his contacts with different sides.