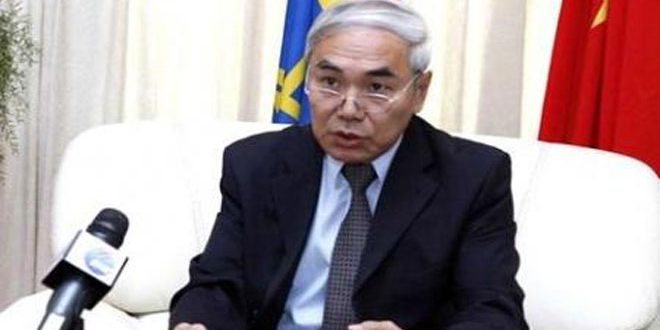 Moscow, SANA_ China’s Special Envoy for Syria Xie Xiaoyan has said that China is ready to work with relevant countries including Russia in post-war reconstruction efforts in Syria.

“China is positive about taking part in post-war reconstruction in Syria, and we are ready to cooperate with Russia and other relevant parties,” Xie said, after talks with the Russian Foreign Ministry’s special envoy for Middle East settlement Sergei Vershinin on Thursday.

He stressed that Russia is China’s strategic partner and Beijing is ready to regularly exchange viewpoints and work together for finding political solution to the crisis in Syria.

“Russia, as you know, is China’s comprehensive strategic partner of coordination, therefore China is ready to compare notes on a regular basis with Russia and work closely together to make positive efforts to promote the political solution for the crisis in Syria,” Xie said.

He expressed his country’s respect for the will and option of the Syrian people, adding that the future of Syria is a “purely internal issue.”

On a relevant note, Xie Xiaoyan met the Russian President’s Special Representative for MENA Affairs, Deputy Foreign Minister Mikhail Bogdanov, and discussed with him issues pertaining to the Middle East with emphasis on the political settlement for the crisis in Syria.

During the meeting, the two sides stressed the need for all sides to implement relevant Security Council resolutions as well as the decisions of the International Syria Support Group (ISSG).