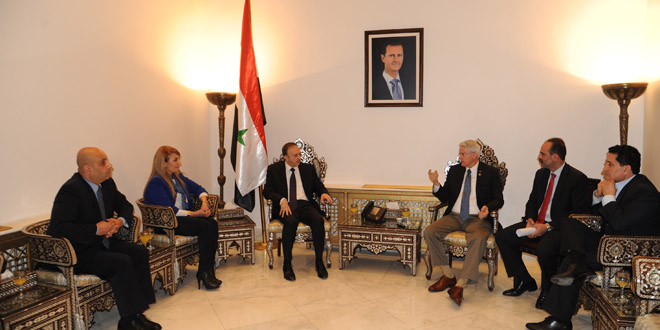 Damascus, SANA- Speaker of the People’s Assembly Mohammad Jihad al-Laham discussed during a meeting with U.S. Senator for the State of Virginia Richard Hayden “Dick” Black the latest political developments in the region and the efforts exerted in combating terrorism, in addition to the unfair economic blockade imposed on the Syrian people.

Black said that what is happening in Syria nowadays affects the future of civilizations in the world, noting that although Syria is a small country, it’s a central country in the region, considering that if Syria would lose the war, there would be serious repercussions on civilization and humanity in general.

Black said that Russia’s intervention in the war against terrorism caused great changes, adding that he’s reassured about the result of the war waged by the Syrian Arab Army against terrorists. The Senator pointed out that as soon as he returns to the United States, he will work towards organizing discussions in the Congress in order to change the prevailing view about what is happening in Syria, and that he will seek to reopen the Syrian Embassy there, adding “I will be Syria’s voice.”

He also stated that the steadfastness of a country like Syria in the face of all American, European, and Arab Gulf powers is “a miracle from God.”

In turn, al-Laham stressed that Syria is combating terrorism and extremism on behalf of the whole world, and that victory over the armed terrorist organizations is a victory for civil values, stressing the for decision-making establishments in the world to realize the reality of who is funding and arming terrorism and put an end to this.

Al-Laham added that many countries participate through deliberate policies or erroneous ones in spreading extremism, chaos, and terrorism, adding “we in Syria believe that the United States is not serious about combating terrorism despite the coalition that it leads against ISIS, a coalition which did not achieve any results on the ground,” lauding the objective positions of Senator Black regarding the terrorist war waged on Syria.

The US Senator arrived in Syria on Tuesday in a visit that will last for three days.

Earlier, in a statement to SANA upon his arrival in Damascus, Senator Black stressed that what is going on in Syria is terrorism and the issue is simply that there are terrorists fighting the Syrian people and the legitimate government, adding that there are no “moderate” fighters in Syria.

He clarified that many people misunderstand what is happening in Syria, and some of them did not believe that those who are fighting the Syrian people and the government are all terrorists, hoping that he would be able to let the American people know the reality about Syria.

Black, who is a Republican member of the Virginia State Senate, said the crisis in Syria did not start from inside the country but rather in Western and Gulf capitals and their intelligence services, who made the decision to create chaos and have actually done so and shed lots of blood.

He told SANA reporter that although he had not visited Syria before, but he has studied the situation in it in depth and for a long while, which allowed him to tell who is bad and who is good.

Black went on saying that what he can tell is that President Bashar al-Assad was legitimately elected in 2014 elections in which two thirds of eligible voters voted and many of those voted in his favor.

President al-Assad wants to build a developed and modern state where people are free and can practice their religious beliefs without violence, Black added.

He wondered how parties such as Saudi Arabia, which has never for once had elections held in it, could ask for elections to be held in Syria and for the constitution there to be changed.