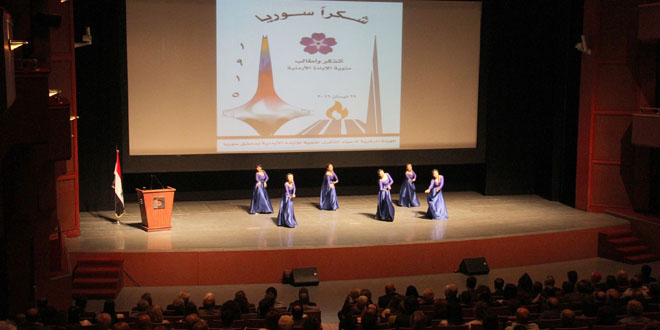 Damascus, SANA – The central committee for marking the 101st anniversary of the Armenian genocide carried out by the Ottomans organized an event on Sunday evening titled “Thank You Syria” at the Opera House in Damascus.

In a speech at the event, Armenian Ambassador in Damascus Arshak Poladian said that Syria had embraced Armenians and offered them with means of leading their lives when the Ottoman Empire forced them to leave their land, and now Armenians are an integral part of the Syrian social tapestry. In turn, Catholic Armenian Bishop of Damascus Joseph Arnaouti said that Syrian-Armenian relations are deep-rooted, and Armenians appreciate how Syria hosted them and preserved their language and heritage, and in turn Armenians had a positive role in Syria as they helped build Syria in various ways.

For his part, Orthodox Armenian Bishop of Damascus Armash Nalbandian asserted that Armenians always have and always will be faithful to Syria, and today they stand alongside it in the face of the terrorism which is backed by neo-Ottomans.

The event included screening of documentaries on the Armenian genocide and how displaced Armenians were received in Syria, in addition to distributing copies of the book “Western Testimonies on Armenian Genocide in the Ottoman Empire” and presenting commemorative plates to People’s Assembly Speaker Mohammad Jihad al-Lahham, Culture Minister Issam Khalil, State Minister for Environment Affairs Nazira Serkis, Ambassador Poladian, and the Catholic Armenian and Orthodox Armenian dioceses.

The Armenian genocide took place between 1915 and 1923, claiming the lives of 1.5 million Armenians who were slaughtered by the Ottoman Empire.