Sheikh Saleh al-Ali Festival to Kick off in Tartous Sunday

Tartous, SANA – The 19thedition of Sheikh Saleh al-Ali Festival will kick off on Sunday in Sheikh Badr city in Tartous province marking  the Independence Day which celebrates the anniversary of the evacuation of occupying French troops from Syria.

The three-day festival includes: two exhibitions for traditional handicrafts and plastic arts, a poetic concerthonoring symbols of the Syrian revolution against French occupation and a theatrical show by Friends of Tartous National Theatre Group, wrapping up with a musical concert by Amrit band on Tartous-seaside Corniche.

The festival is held by Tartous Governorate in cooperation with the Directorate of Culture in Tartous, Sheikh Badr City Council and other popular and economic figures. 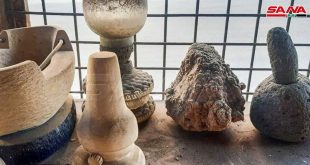