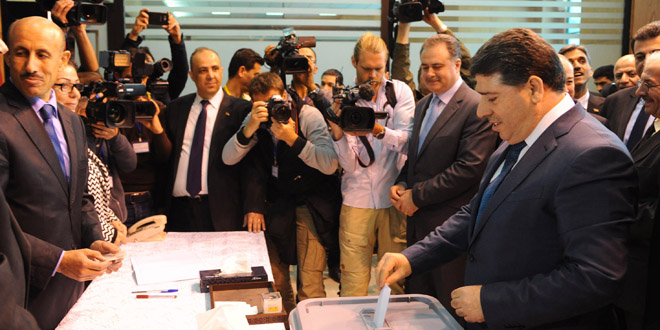 Damascus, SANA – Prime Minister Wael al-Halaqi stressed that the elections taking place in Syria today, along with the achievements of the Syrian Arab Army, are proof of the vitality of the Syrian people and their determination to build the homeland.

In a statement after voting, al-Halaqi said that the elections are complemented by the achievements of the Syrian Arab Army, resuming intra-Syrian dialogue in Geneva, the reconstruction process, and expanding local reconciliations.

The Premier said that the enthusiasm shown by Syrians for both voting and running for the elections is a rebuttal to the feeble attempts of Syria’s enemies who want to dismantle the Syrian people’s patriotic awareness. In a similar statement after voting, Deputy Prime Minister, Foreign and Expatriates Minister Walid al-Moallem, said “We in Syria constantly say that the Syrian people will decide their fate, and today proves this saying practically. I call upon our people to emphasize this message by exercising their right to vote.”

Al-Moallem said that the Syrians sent a message today that says they are the ones who decide their future, and no other side, no matter what it is, has the right to say “this is legitimate” or “this is illegitimate” in the face of the Syrians’ will.

For his part, Interior Minister Mohammad al-Shaar affirmed that the strong turnout at the polling centers proves the vitality of the Syrian people and their determination to defy the terrorist war waged against them, pointing out that Syrians are voting today against terrorism, killing and sabotage.

Likewise, Religious Endowments (Awqaf) Minister Mohammad Abdelsattar al-Sayyed said that the unmatched turnout of voters embodies the Syrians’ adherence to their constitutional and national establishments, while Electricity Minister Imad Khamis said the holding the elections at their appointed time shows the strength of the Syrian people and state, a sentiment echoed by Petroleum and Mineral Resources Sufian al-Allaw who stressed that the elections show the people’s commitment to continuing their political life, adding that voting constitutes a practical response to Takfiri and obscurantist mentalities. Education Minister Hazwan al-Waz said today’s elections are important and pivotal because they are held while a battle for defending Syria and its people is being waged, while Higher Education Minister Mohammad Amer al-Mardini said the elections are an expression of the resilience of the Syrians which they have been showing for five years.

Meanwhile, Economy and Foreign Trade Minister Humam al-Jazaeri said the considerable turnout of voters shows the Syrians will to bolster state establishments, and that elections pave the way for the reconstruction stage.

For her part, State Minister for Environmental Affairs Nazira Serkis said these elections have a distinct quality because the current circumstances in Syria strengthen the sense of affiliation to the homeland among Syrians and raised their awareness, their concern for their country, and their sense of responsibility.

Tourism Minister Bisher Yazigi affirmed on Wednesday that the remarkable turnout to participate in legislative elections today is a proof that the Syrians are strong believers in their state.

In turn, Labor Minister Khalaf al-Abdullah said that the parliamentary elections are an evidence of the Syrian people’s adherence to their national and independent decision.

For his part, Culture Minister Issam Khalil said that electoral process completes the Syrian Arab Army’s role and reflects the Syrians’ appreciation of the sacrifices of martyrs and paves the way for the reconstruction stage to build a modern Syria.

Meanwhile, Internal Trade and Consumer Protection Minister Jamal Shahin considered that the turnout at the polling centers confirms that Syrians are stronger than terrorism and Takfiri schemes.