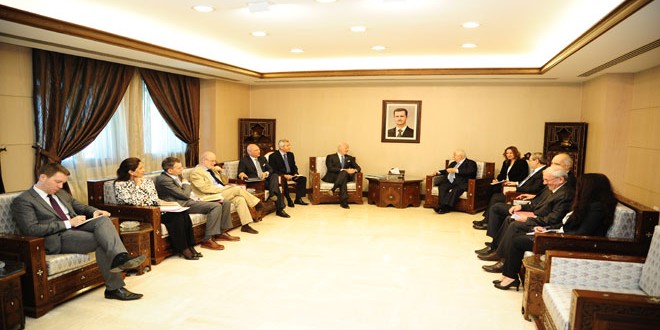 Damascus, SANA_ Deputy Prime Minister, Foreign and Expatriates Minister Walid al-Moallem on Monday met United Nations Special Envoy for Syria Staffan De Mistura, with the latter reviewing the ideas and efforts exerted to ensure the success of the talks which are due to be resumed within days in Geneva.

De Mistura also briefed al-Moallem on the agenda for the upcoming round of talks, in addition to explaining the reasons behind the tour he is conducting in the region to hold consultations regarding the Geneva dialogue. For his part, Minister al-Moallem reiterated Syria’s position regarding the political solution to the crisis and its commitment to an intra-Syrian dialogue led by Syria without preconditions, asserting that the Syrian Arab Republic delegation is ready for the next round of talks scheduled for April 15th.

Al-Moallem affirmed that the Syrian people are confident in their right to decide their future and the inevitability of their victory over ISIS, Jabhat al-Nusra and, other terrorist organizations which continue to breach the cessation of hostilities agreement under directives from their sponsors in Turkey, Saudi Arabia, and others, all in a bid to thwart intra-Syrian dialogue in Geneva after the successive victories achieved by the Syrian Arab Army on the ground, the most recent of these victories being the liberation of the historical city of Palmyra and al-Qaryatain city.

The Minister emphasized that the Syrian government is committed to continuing it tireless efforts to combat terrorism, protect its citizens, deliver aid to those in need and to ease their suffering caused by foreign-backed terrorism and the unjust sanctions imposed on the Syrian people and institutions.

In a statement to journalists after the meeting, de Mistura said that the main goal of the talks he held with Minister al-Moallem was to discuss preparations for the Geneva talks which are planned to be held on April 13th after his return from his tour. He said that they also discussed delivering humanitarian aid to besieged areas and to all Syrians and the prospects of increasing it, noting that airdropping of aid which took place in Deir Ezzor on Sunday was a promising and significant endeavor by the World Food Program (WFP), adding that this was an initiative by the international community to show commitment to accessing all areas via complicated methods like airdropping.

De Mistura also said that they discussed the importance of protecting and bolstering the cessation of hostilities which he said is fragile yet it remains enduring, voicing hope for ensuring its continuation despite incidents taking place that should be contained.

On the participation of Syrian Kurds in the Geneva talks, de Mistura said that Kurds are present in several delegations.