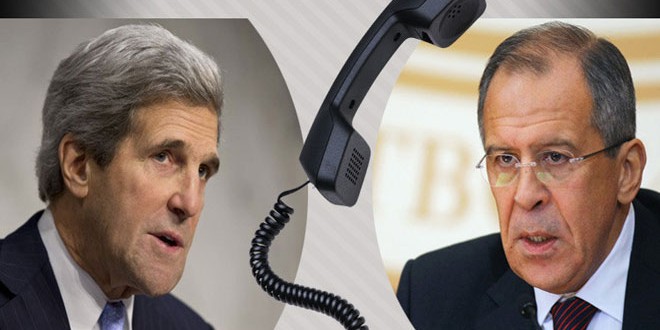 Moscow, SANA – Russian Foreign Minister Sergey Lavrov and US Secretary of State John Kerry on Sunday stressed the need for boosting cooperation between Moscow and Washington to enhance the implementation of the cessation of hostilities agreement in Syria.

The Russian Foreign Ministry stated that during a phone call, the two sides stressed commitment to strengthening joint efforts for combating ISIS, Jabhat al-Nusra, and other terrorist organizations.

Lavrov and Kerry also agreed on taking additional measures to cut off ISIS from weapons, supply routes and fighters, and reiterated their support for the efforts of UN Special Envoy for Syria Staffan de Mistura for holding a new round of intra-Syrian talks in Geneva, underlining the importance of ensuring a comprehensive framework for dialogue.