President Putin: Solving problem of extremism is important condition for settlement in Syria 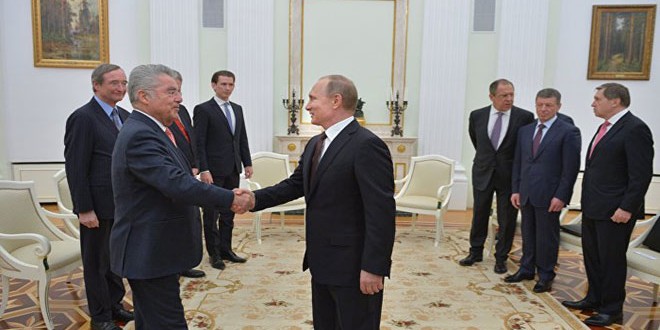 Moscow, SANA-Russian President Vladimir Putin affirmed on Wednesday that solving the problem of extremism is considered an important condition to settle the crisis in Syria and an effective solution to the issue of refugees in Europe.

“The refugees have to be able to return home,” President Putin said at a meeting with his Austrian counterpart Heinz Fischer in Moscow, adding that the latest terrorist acts in Brussels and Paris affirm once again the need for unifying efforts of the international community against terrorism.

President Putin: Solving problem of extremism is important condition for settlement in Syria 2016-04-06
m.eyon
Share
Previous Churkin: Turkey has the largest center for selling the looted antiques from Syria
Next Updated- The army continues hunting down ISIS and Jabhat al-Nusra terrorists