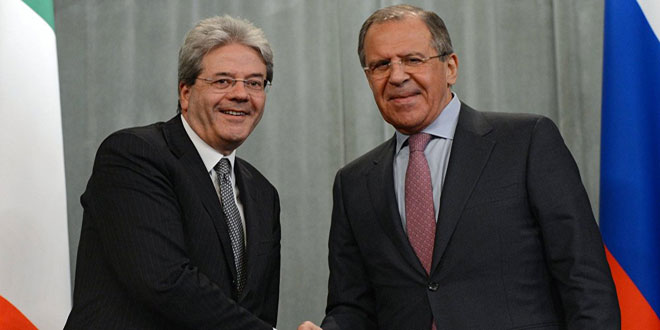 Moscow, SANA-Russian Foreign Minister Sergey Lavrov affirmed the importance of supporting the Syrian-Syrian dialogue in Geneva to find a political solution to the crisis, highlighting the need to focus on unifying international efforts to combat terrorism.

In a joint press conference with his Italian counterpart Paolo Gentiloni, Lavrov said that the two sides discussed the situation in Syria including “our joint work within the framework of the International Syria Support Group (ISSG)” and stressed on the commitment to the cessation of hostilities agreement in Syria and the need to intensify efforts to prevent any attempts to breach the agreement.

He added that the two sides focused on the political process that kicked off in Geneva and the need for all Syrians to be represented in it, explaining that the joint position of Russia and Italy is that the resolutions adopted by the UN Security Council about the methods to settle the crisis do not imply the need to have less interest in combating terrorism.

The Russian diplomat continued as saying that the ongoing military operation by the Syrian Arab Army in Tadmour (Palmyra) City with the support of the Russian Air Force will be carried through to its successful end.

On the continuation of terrorists’ flow through the Turkish border to the Syrian land, Lavrov said that there are serious reports about this issue which underscores the need to implement the UNSC relevant resolutions to prevent it and to stop financing and arming terrorists.

Lavrov described as “very vital” the importance of drawing the attention of international community to the violations of the ban on deals and trade with terrorists, reiterating Russia’s call for forging a united international front against terrorism.

The Russian official affirmed the importance of coordination among all players who are able to contribute to the fight against terrorism which he said is an important issue in light of the mounting terrorist threat, as made plain by the recent dreadful terrorist attacks in Brussels.

For his part, Gentiloni stressed his country’s support for the Syrian-Syrian dialogue in Geneva with the participation of all Syrian parties, expressing hope that the dialogue will be fruitful within a few months, adding that Russia plays a key role in many international issues including Syria.

He hoped that the city of Palmyra will be liberated from ISIS terrorists soon and that its historic sites will be restored and rehabilitated, pointing out that the terrorist attacks in Brussels highlighted the need for concerted international efforts to combat terrorism and extremism.