New areas restored by army in Lattakia, many ISIS terrorists killed in Raqqa 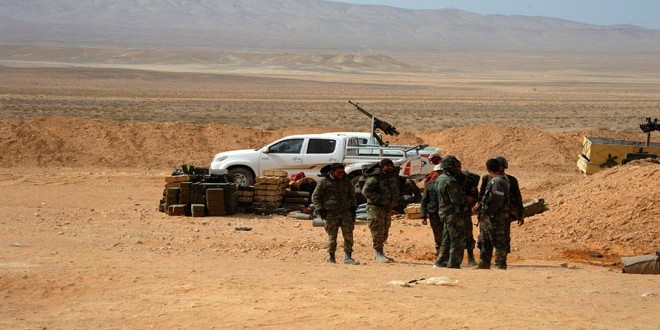 Provinces, SANA – Units of the Army and Armed Forces on Sunday continued military operations in several areas around the country, restoring new points and thwarting terrorist attacks where scores of terrorists were killed or injured.

The army units, in cooperation with popular defense groups, established control over the Points 287, 397 and 409 and killed members of terrorist groups that infiltrated to al-Sawda village in the northern countryside of the coastal Lattakia province.

The units later dismantled and removed the landmines and explosive devices which the terrorists had planted earlier in the points and the village.

A military source told SANA that the army units, aided by the popular defense groups, also thwarted an attack by terrorist groups on military posts in the direction of al-Qalaa Mountain and Ain al-Baida area in the province.

Later, army units, in cooperation with popular defense groups, established control over Rweiset Rasho, Jouret al-Nahla and the Points 550, 592, 540.5, 605 and 511.5 in the northern countryside of Lattakia.

Army eliminated the last terrorists sites in the area and dismantled the explosive devices and landmines left behind by the defeated terrorists.

In the meantime, many ISIS terrorists were confirmed dead or injured as a result of army airstrikes on their positions in the northeastern Raqqa province.

The military source explained to SANA that the army’s air force carried out in the past 24 hours sorties targeting gatherings of terrorists and several centers and sites for ISIS terrorist organization in the southern part of Raqqa city.

As a result of the intensive airstrikes, the centers targeted were destroyed, leaving dozens of ISIS terrorists dead or wounded, the source said.

Meanwhile, it was reported in the media that the so-called “Wali of Raqqa” within ISIS, who is named Ali Mousa al-Shawakh, was killed in the airstrikes.

Along with al-Shawakh, an ISIS checkpoints official nicknamed Abu Farah was also among the dead.

The army units clashed with ISIS terrorists in the surrounding of Deir Ezzor Airport in the eastern Deir Ezzor province, killing many of them and injuring others.

According to a field source, the army units foiled a terrorist attack of ISIS in the axes of al-Sinaa neighborhood, the villages of al-Jafra and Hweijet Saker and on Hrabish neighborhood in Deir-Ezzor city, inflicting heavy losses upon the terrorists.

Another army unit clashed with ISIS terrorists after two suicide terrorists blew up explosive belts in front of Furat al-Sham Hotel in al-Bogheilia area in the northwestern countryside of the province, killing or injuring many of the terrorists.

Army units repelled in the past hours ISIS attacks on the villages of Kafr Saghir and Babins in the northern countryside of Aleppo province.

A source on the ground explained to SANA that the army units, backed by supporting forces, clashed with the ISIS terrorists who attacked the two villages, thwarting the assault attempt.

Many of the attackers were killed or injured, and the rest managed to flee, according to the source.

Later on Sunday, a military source said that the Syrian Air Force destroyed ISIS’ dens and gatherings along with their weapons and ammunition in Deir Hafir and Maskana in the eastern countryside of Aleppo.

Gatherings of ISIS terrorists were hit in airstrikes in al-Qaryatain city, 80 km southeast of Homs city.

The air force also targeted sites and gatherings of ISIS terrorists in the area surrounding Tadmur (Palmyra) city and in Khneifis area and al-Sawana village to the southwest of Tadmur, inflicting losses upon them in personnel and equipment.

The Air Force carried out strikes against gatherings and dens of ISIS terrorist organization in Qastal Shamali and Qastal Jounoubi villages and Oqeirbat town in Salmiyeh countryside and destroyed them.

Terrorists from Jabhat al-Nusra were killed and their positions were destroyed during strikes that were carried out by the Air Force against their gatherings and hotbeds in al-Inkawi village on the outskirts of al-Ghab Plain 79 kilometers to the north west of Hama city.