De Mistura: Next week will focus on common ground between Syrian sides 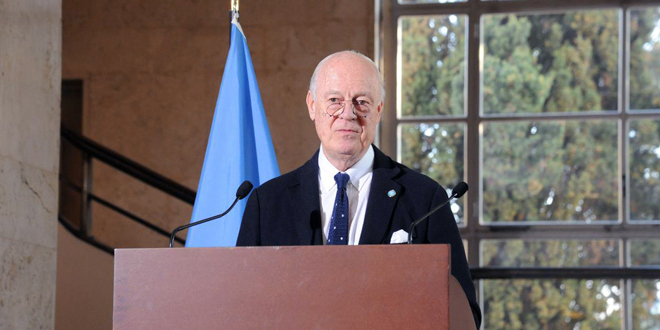 Geneva, SANA – UN Special Envoy for Syria Staffan de Mistura said that next week will be the last in the second round of intra-Syrian dialogue, during which the focus will be on finding common ground between Syrian sides.

In a statement to journalists on Friday evening, de Mistura said that he met with the Syrian Arab Republic delegation which reiterated its desire for there to be a commonly-shared list of principles, which is what will be focused on next week, adding that focusing on principles is important, but he hopes that the delegation would present its views on political transition next week.

De Mistura said he began Friday’s meetings with one with the women advisory delegation, noting that this delegation can be a bridge between women in different delegations in an informal capacity.

He added that he also met a delegation from the opposition inside Syria, noting that the Security Council resolution gives him the mandate to consult with anyone who has anything to say that can lead to moving forward in intra-Syrian dialogue.

De Mistura asserted that the Russian-American efforts that parallel the dialogue in Geneva are beneficial to pushing forward towards resolving the crisis in Syria, and that the upcoming meeting between Russian Foreign Minister Sergey Lavrov and US Secretary of State John Kerry will be very important.

He also reiterated that intra-Syrian dialogue in Geneva consists of three rounds, after which concrete results will be reached.