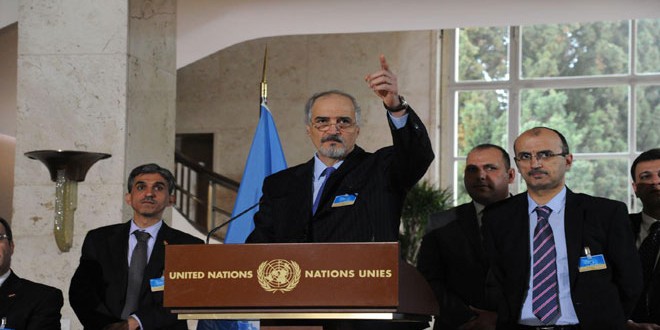 Geneva, SANA – The delegation of the Syrian Arab Republic to intra-Syrian dialogue in Geneva held a new session of talks with UN Special Envoy for Syria Staffan de Mistura, his deputy Ramzy Ezzeldin Ramzy, and senior assistants at the UN headquarters in Geneva.

In a statement to the press after the session, Bashar al-Jaafari, head of the Syrian Arab Republic delegation, described the session as constructive and useful, and that it discussed practical steps to help open the door for a Syrian-Syrian dialogue per excellence without foreign interference and without preconditions being imposed by anyone.

Al-Jaafari, who is Syria’s Permanent Representative to the UN, said the talks focused on completing the important discussions about the form of the dialogue before moving to the substance, which includes the agendas and other matters.

“We had in-depth discussions of the matter of the form and the need to give this issue enough importance in terms of ensuring the broadest representation of the Syrian opposition in implementation of the two Vienna communiqués and the Security Council resolution no. 2254,” said al-Jaafari, adding that this has not yet been accomplished because some of the opposition delegations have not yet arrived in Geneva.

He stressed that no single party has the right to claim to be the only representative of the opposition groups, and that is in accordance with the Security Council resolution.

“We agreed to follow up on the important ideas and views we presented to the Special Envoy before yesterday and to have in-depth discussions of these ideas so that they can be the main basis of discussion in the next session of talks, which would allow the Special Envoy to move on solid and firm bases from the form stage to the substance stage,” he said, adding that the next session should be useful and promising if all the notes presented by the Syrian Arab Republic to de Mistura and his assistants during Wednesday session were to be taken into consideration. In response to a question on expanding the participation of opposition groups in dialogue, al-Jaafari said that this expansion is stipulated in the two Vienna communiqués and Security Council resolution no. 2254 which states that the UN Envoy should invite the broadest spectrum of the opposition, reiterating that no-one has the right to claim to be the sole representative of opposition groups.

On whether the session tackled the issue of monitoring Syrian-Turkish borders, al-Jaafari said that this issue has been discussed with de Mistura and his deputy, with the delegation stressing that resolution no. 2254 must be respected full and not in a selective, relative, or temperamental manner.

“We didn’t discuss only the continuing flow of terrorists through borders from Turkey; we also discussed the terrorists sponsored by Israel and the terrorists who come from Jordan, and we asked de Mistura to work with the other sides that claim to want the shedding of Syrian blood to end in order to stop this blatant violation of resolution no. 2254 and the Vienna communiqués,” he elaborated, stressing that the delegation requested that all the Security Council resolutions on Syria be handled in a serious manner.

In response to a question on the reduction of Russian forces in Syria, al-Jaafari said that the decision was taken jointly by President Bashar al-Assad and President Vladimir Putin, therefore it wasn’t a surprise to the Syrian side, adding that Russians came to Syria in accordance to a joint decision and therefore their withdrawal or partial or full redeployment would also be done via Syrian-Russian joint cooperation.

Regarding talk of the Syrian Kurds to establish a “federal rule” in northern Syria and the impact on that on the dialogue in Geneva, al-Jaafari said the main reference points in indirect intra-Syrian dialogue prevent raising such scenarios, stressing that what is being discussed in Geneva is how to preserve Syria’s unity, independence, and integrity, which is why he will not comment on unilateral statements that come from here or there.

Al-Jaafari reiterated that the Syrian Kurds are a major component of the Syrian people, adding that “any attempts to create discord among Syrians are going to fail.”

As to the matter of reaching the stage of direct talks, al-Jaafari said that in principle, the talks will only move from the form to the substance stage after all objective conditions are finalized and after intra-Syrian accord is reached between the Syrian Arab Republic delegation and all opposition delegations.

He also reaffirmed that the Syrian Arab Republic delegation will not engage in direct talks with terrorists, adding that the chief negotiator of the “Saudi” delegation is a member of a terrorist group responsible for shelling embassies and murdering innocent civilians including students at the Engineering Faculty in Damascus.

For his part, de Mistrua’s deputy Ramzy Ezzeldin Ramzy said in similar statements to the press that Wednesday’s session with the Syrian Arab Republic delegation tackled essential issues, and that clarifications regarding ideas put forth by the delegation on Monday were discussed. Ramzy said that there will be a meeting on Wednesday evening and on Thursday with opposition groups, noting that the first of those two meetings will be with members of the Cairo and Moscow groups, while the next meeting with the Syrian Arab Republic delegation will be on Friday.

“We extended invitations to members of the Cairo and Moscow group in the first round to help us in setting a perception for the future of Syria,” he said, adding “we are very keen on listening to the views of the broadest spectrum of the Syrian people inside and outside the country.”

“So far, the process is advancing and developing, and there are some issues being proposed which revolve around the reduction of violence and the reactions of delegations, and we believe that we’re achieving success and progress in our discussions with all participants,” Ramzy said.

He stressed that the mediator’s task is to find points of convergence, and that there are some issues that can be classified as common denominators which he believes all Syrians agree upon, adding “this is reassuring, because since we found an amount of convergence, our task is to build upon it, which is what we will do in the coming period.”

Ramzy also said that in addition to convergence, there are disagreements which are significant, but he voiced belief that they can be dealt with in some manner.

He asserted that the UN position is clear on the unity and territorial integrity of Syria, saying that this matter is absolute and bears no discussion, affirming that the future of Syria is to be decided by the Syrians themselves.

Ramzy expressed hope that the next meeting between US Secretary of State John Kerry and Russian Foreign Minister Sergey Lavrov will be a successful one since they have tools to push forward the political peaceful process forward, adding that important decisions will be made in the coming days, all of which will be efforts to end the crisis in Syria.