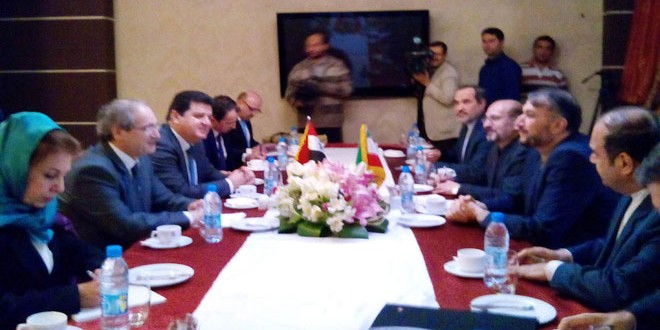 The two sides also discussed the exerted efforts to solve the crisis in Syria, the latest field developments and combating terrorism in light of the UN documents and resolutions related to Syria.

In a press statement following the meeting, Mikdad said that his visit aims at “informing our brothers in Iran of the political developments and the Syrian government’s view as we both stand in the same trench and struggle together against terrorism.”

Mikdad pointed out that he informed the Iranian side about the current circumstances in Syria and Syria’s commitment to the cessation of hostilities agreement.

The Syrian diplomat affirmed that the Syrian-Syrian dialogue in Geneva is held without any predictions as the Syrian government will not accept any conditions and is exerting all efforts to maintain the sovereignty and the steadfastness of Syria in facing terrorism and the conspiracies hatched by some countries in service of the interests of Israel.

Mikdad pointed out that the Syrian government is determined to continue its fight against terrorism in cooperation with its allies until clearing the Syrian land of it for a political solution to be reached based on the Syrian-Syrian dialogue without any foreign intervention, in a way that ensures the preservation of the independence of Syria and its sovereignty and territorial integrity.

He pointed out that Syria welcomes any honest efforts in this regard in order to preserve the interests of the Syrian people.

He stressed the Syrian government’s commitment to the cessation of hostilities agreement in accordance with the United Nations Security Council resolution 2268, adding that the terrorist organizations had breached this agreement several times.

He went on to say that the Syrian government and its allies continue to confront terrorism based on the relevant UNSC resolutions and in parallel with the success of local reconciliations and delivering humanitarian aid to needy people.

He added that Syria and its allies will also continue efforts to make the democratic process a success by holding the parliamentary elections next month.

In turn, Abdullahian reiterated his country’s support for Syria in its fight against terrorism and reaching a political settlement in which the Syrians themselves decide their own future without any foreign intervention.

He added that the cessation of hostilities should not be exploited by terrorists to consolidate their positions, stressing on the need to continue combating terrorism in accordance with the UNSC resolutions.

Mikdad reviewed in detail the local reconciliations that are achieved across Syria which reflect the Syrians’ adherence to their unity, commitment to defending their land and their desire to end the crisis.

He reaffirmed Syria’s condemnation of the Gulf stances which have become an integral part of Israel’s strategy in the fight against the resistance front represented by Syria, Iran and Hezbollah.

In turn, Sarmadi said that Iran will continue to support Syria in combating terrorism. 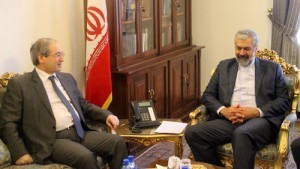