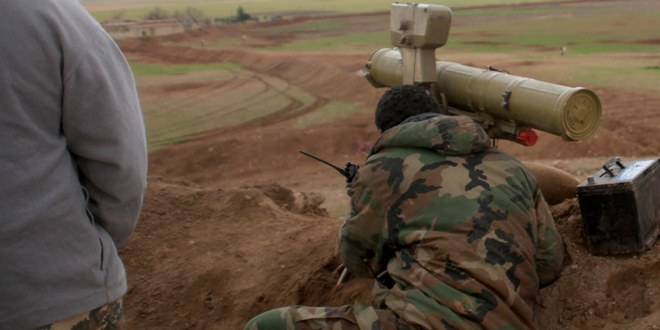 Provinces, SANA _ The army’s units and air force continue targeting the positions and hideouts of the terrorist organizations, inflicting heavy losses upon them.

An army unit destroyed positions for Jabhat al-Nusra terrorist organization and killed 11 of its members in Abu al-Duhour town, 50 km south east of Idleb city, a source on the ground told SANA on Sunday.

Seven more Jabhat al-Nusra terrorists were killed and others were injured in an army operation against their hideouts in the vicinity of Jarjanaz town, 10 km east of Maaret al-Nouman city in the southern countryside of Idleb province.

In a relevant context, two terrorists from the so-called “Failaq al-Sham” were killed when an explosive device went off in their vehicle in Atmah town, according to local sources.

The army’s air force launched during the last 24 hours airstrikes against ISIS sites to the east of Mhein town in eastern Homs to which the army restored security late last year, according to a military source.

Two centers and a number of vehicles, some of them equipped with heavy machineguns and others loaded with weapons, were destroyed in the airstrikes, the source confirmed.

Gatherings of ISIS terrorists and several of their fortifications were hit in army airstrikes in al-Mrei’iyeh town and to the east of al-Jafreh village, located on the southern bank of the Euphrates River in the eastern Deir Ezzor province.

The airstrikes left a number of centers and vehicles, some equipped with machine guns, destroyed and a number of the terrorists dead.

More fortified sites and positions for ISIS terrorists were destroyed in army airstrikes in al-Bgheiliyeh village, 7 km to the west of Deir Ezzor city, according to the source.

A number of ISIS hideouts were also hit on the outskirts of al-Rushdiyeh neighborhood in the city, with many terrorists getting killed.

Sources on the ground told SANA that army units prevented a group of ISIS terrorists from infiltrating towards the graveyards area west of Deir Ezzor and al-Borsaeed and al-Urfi streets, killing and injuring scores of the terrorists including the group’s leader.