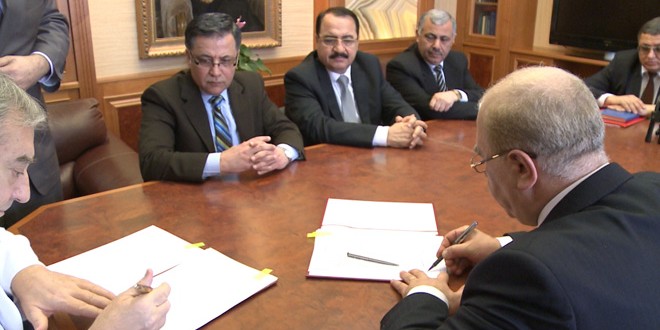 It was also agreed to set up a center for joint medical coordination between the two countries.

From the Syrian side, Minister of Higher Education Dr. Mohammad Amer Mardini, director of al-Mowasat hospital in Damascus Dr. Hashim Saqer signed the agreements in the presence of members of the delegation accompanying and the Syrian Ambassador in Moscow Riyad Haddad.

In an interview with SANA reporter in Moscow, Dr. Mardini emphasized the importance of the Syrian-Russian cooperation in the medical field, public health and the exchange of medical expertise between the two countries.

Mardini said “ We have entered the framework of the actual agreements and cooperation at the health level between the educational hospitals in Syria and hospitals in general in Russia”, noting that the cooperation will focus on the treatment of injuries occurring due to the unjust war waged on Syria, including injuries among civilians and military personnel, particularly neurological and orthopedic trauma, declaring the intention of the two sides to cooperate in establishing a Russian- Syrian medical center to treat those who are wounded and to provide Syria with all health requirements regarding prosthetic limbs and medical equipment.

Minister of Higher Education said that Russia showed great interest in cooperation with Syria, expressing hope to develop the health relations to match the level of political relations between the two countries.

For his part, Dr. Saqer said that the Syrian-Russian relations are deep rooted and promising , pointing out that Moscow provided Syria with big assistance in preparing medical staffs and this agreement will be the base towards the practical application of the medical services in Syria, particularly in higher education, noting that the unfair western sanctions imposed on Syria have affected negatively the health sector especially university hospitals the provision of prosthetic l limbs, spare parts, as well as medicines and other medical cosmetics.

Dr. Saqer explained that the Russian side expressed full readiness to provide all that is needed in this sector in order to treat the sick and wounded in this terrorist war against Syria, as well as readiness to send medical teams to treat the injured persons in addition to taking some cases to Moscow and treat them in the best medical centers in Russia.

Dr. Saqer noted that there is an agreement to set up a joint fund to support the implementation of establishing the Syrian-Russian medical coordination joint center to contribute to treating the war wounded persons in the Russian centers.

The Fund will be under the chairmanship of Dr. Saqer and Professor Sergei Mironov, member of the Russian Academy of Sciences
.
In turn, Professor Mironov said that the meeting with the Syrian medical delegation came as an expression of the free will of the multi-faceted cooperation between Russia and Syria, particularly in the health sector, training doctors, treating the injured and exchanging medical information, affirming that this cooperation will be fruitful in the near future.