Al-Jaafari: We don’t recognize the authority of International Commission of Inquiry on Syria 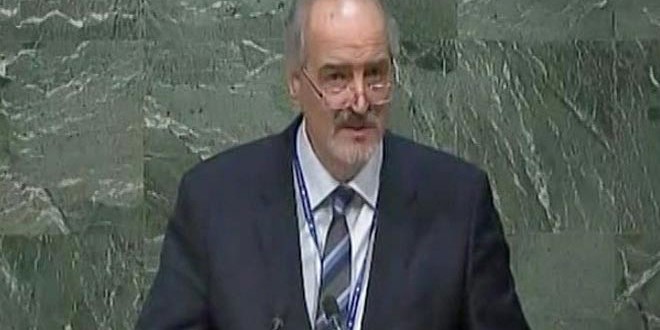 New York, SANA- Syria’s Permanent Envoy to the United Nations Bashar al-Jaafari said that the Syrian government doesn’t recognize the authority of the The Independent International Commission of Inquiry on Syria  and doesn’t accept discussing its members.

Al-Jaafari, at an informal session for the UN General Assembly held on Tuesday to hear a briefing from members of The Independent International Commission of Inquiry on Syria, said “The selectivity and politicization became firm types in the reports and briefings of the commission that rely on fake narrations and misleading testimonies of some people out of the Syrian borders or fabricated reports of non -government organizations.”

He added “The commission ignored the testimonies of thousands of Syrians who were victims of the terrorist organizations’ crimes,” adding” it also ignored the abundant information provided by the Syrian government to the United Nations since  the beginning of the crisis through more than 600 official letters.”

Al-Jaafari regretted that the Commission would be as one of the mechanisms that had previously targeted the sovereignty, independence and stability of UN member countries under fabricated pretexts, after which, the events have proved they were untrue.

The war in Syria, according to al-Jaafari, is not a war among Syrians, rather it is war on the global terrorism and the countries that supported it and choose to fight over the Syrian lands using terrorism as a political weapon.

Al-Jaafari wondered “Doesn’t the Commission see that the biggest violation of human rights in Syria is supporting terrorism… shouldn’t the issue of sending tens of thousands of terrorist fighters to Syria from more than 100 countries to perpetrate the most ugliest violations of human rights is the core and the basic factor in the task of the committee.”

“If the committee was really committed to the human rights, why it doesn’t accuse the international, Arab and regional countries, particularly Qatar, Saudi Arabia and Turkey of supporting terrorism, and why it doesn’t take deterrent actions against them,” al-Jaafari went on.

He affirmed that he had expected the meeting would start with a condemnation by chairman of the session or Chairman of the Commission of the terrorist, bloody explosions that claimed the lives of more than 130 Syrian civilians in Damascus and Homs.

Al-Jaafari: We don't recognize the authority of International Commission of Inquiry on Syria 2016-02-23
m.eyon
Share
Previous Mikdad asserts the government’s keenness to fulfill its obligations towards citizens
Next Submitting nomination requests to elections of People’s Assembly starts Wednesday-HJCE