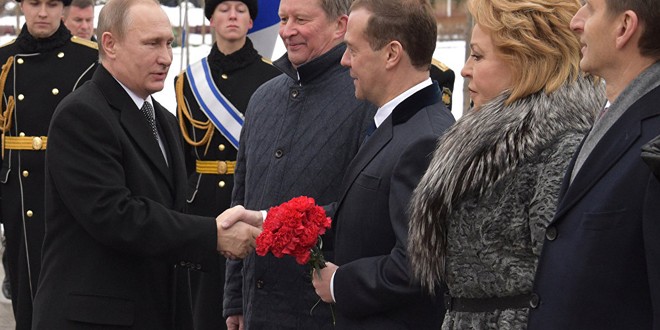 Moscow, SANA- Russia celebrated on Tuesday the Defender of the Fatherland Day (Army Day), a tradition which dates back to 1922 when the Soviet Union set it as the official day for the armed forces on the anniversary of establishing the Soviet Red Army.

On this occasion, Russian President Vladimir Putin took part in the ceremonies and laid a wreath of flowers at the Grave of the Unknown Soldier at the Kremlin walls in the capital Moscow.

Russian Prime Minister Dmitry Medvedev, as well as the head of the Federation Council, the head of the State Duma, the Defense Minister, and other officials in addition to a number of veterans participated in the celebrations.

In modern Russia this day is called the “Defender of the Fatherland Day” through which the Russians commemorates the soldiers who sacrificed their lives in defense of their homeland and hold various activities and celebrations in honor of veterans.

The Kremlin marked this occasion on Saturday, with President Putin stressing the need for maintaining the readiness of the Russian armed forces to respond quickly and appropriately to any potential threat and stop any provocations or aggressions, pointing out the importance of raising the armed forces’ level of military readiness and providing them with the latest weapons and military technology.