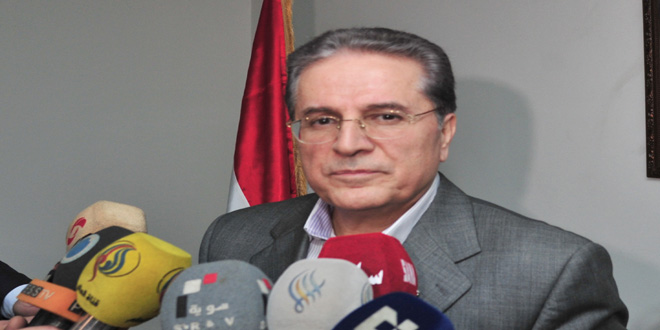 Damascus, SANA-The Higher Judicial Committee for Elections (HJCE) defined THE names of the sub-committees in the provinces and the nomination committees related to the upcoming election of People’s Assembly members next April.

President Bashar al-Assad on Monday issued the decree No. 63 on setting Wednesday, April 13th, 2016 as a date for electing members of the People’s Assembly for the 2nd legislative term.

Head of HJCE Hisham al-Sha’ar told reporters Tuesday that the committee, which held held a meeting after the decree was issued and defined sub-committees and nominations committee, stands at the same distance from all candidates and will adopt procedures that allow the voters to do their constitutional duty with ease and safety and ensure the completion of this constitutional maturity.

Head of HJCE Hisham al-Sha'ar Higher Judicial Committee for Elections (HJCE) 2016-02-23
Manar
Share
Previous 59 wanted persons turn themselves in to get their legal status settled
Next The army kills and injures ISIS and al-Nusra terrorists, destroys their weapons and vehicles