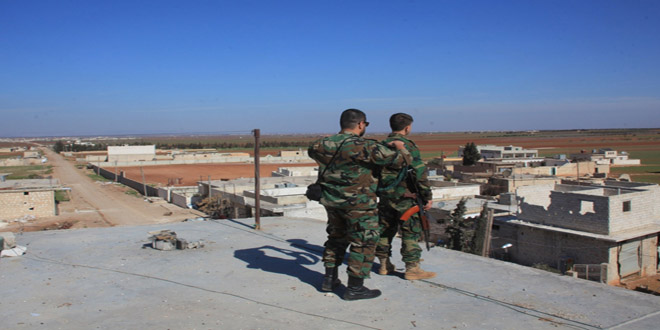 Provinces, SANA, The army and armed forces units advanced Sunday and made more successes in combating terrorism throughout the country.

Regaining control over 19 villages and towns

Earlier, the villages of Huweijineh, Sobeihiyeh, al-Rodwaniyeh, Rayan, al Qaroutiyeh, Roufie and Ain Thabet at al-Sfira area, some 30 km to the northeast of Aleppo city, came under the army’s control.

After intensive operations against ISIS terrorists’ hideouts, the army units regained control over Faaouri and Riman hills in the eastern countryside of the Province.

The source added that the restoration of the seven villages comes after heavy clashes with terrorists of ISIS where big numbers of the terrorists were killed and dozens of them fled to the north.

Works of combing were at once achieved by army units in search for mines and explosives as to dismantle them in order to regain security of the villages completely, the source clarified.

Army units restored security and stability to a number of villages, areas and heights in the north eastern countryside of Lattakia after inflicting heavy losses in personnel and munitions upon terrorist organizations.

ِArmy units in cooperation with the popular defense groups restored security and stability to Beit al-Aous village and established control over the villages of Ard al-Wata, Hakoura al-Tahtaniye, Rweiset al-Malek, Rweiset al-Maqnas, Dahr abu Asaad and a number of strategic points in the north eastern countryside of Lattakia.

Engineering units combed the areas and dismantled a number of mines and explosive devices which were planted earlier by terrorists before the rest of them fled towards Turkey.

The army’s air force destroyed dozens of terrorists’ vehicles, some of which equipped with heavy machineguns, in Atshan and Skeik villages in Hama province.

A number of ISIS vehicles, some of them equipped with machine guns, were destroyed in army airstrikes in al-Qaryatin city in the countryside of Homs province, a military source said.

An army unit targeted a hideout for terrorist leaders within Jabhat al-Nusra in the area surrounding the Citadel of Busra in Busra al-Sham city, 40 km east of Daraa city in the southern province of Daraa, according to a military source.

The hideout was destroyed and a number of the terrorists were killed, the source confirmed in a statement to SANA.

Another army unit targeted a gathering of terrorists in al-Ghariyeh al-Gharbiye village, in addition to destroying a mortar launcher.

In Daraa al-Balad area in Daraa city, the army’s operations against the terrorists’ positions resulted in destroying a command center and killing many terrorists to the south of the park of al-Nazihin Camp neighborhood.

In the northeastern countryside of the neighboring Sweida province, an army unit, in cooperation with the popular defense groups, fired intensively at ISIS terrorists’ fortifications and their movements, destroying a vehicle equipped with a heavy machine gun to the south of Khirbet Saad.

The army’s air force targets a gathering of terrorists’ vehicles in Sinjar town in Idleb, destroying tens of vehicles and an armored car carrier.