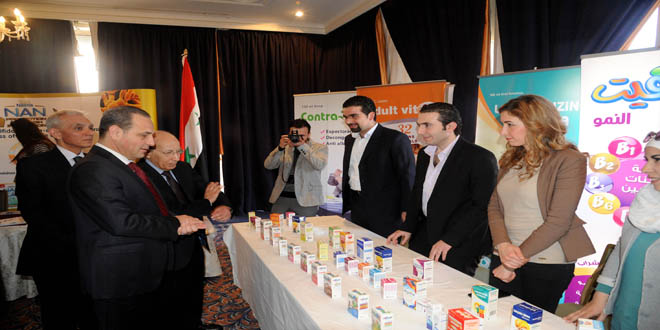 Damascus, SANA – The 23rd Conference of the Pediatricians Association kicked off in Damascus on Wednesday.

Health Minister Nizar Yazigi stressed in his opening speech that the Ministry is committed to its duties of providing requirements for public health, especially children’s health through intensive work to maintain a safe and healthy environment for their growth and development despite the challenges spawned by the ongoing terrorism war in the country.

Yazigi said Syria made a significant health achievement as it has succeeded in confronting polio, confirming that no new polio cases have been detected in the country during the past two years after the disease had its way into Syria in October 2013.

Speaking to the reporters after touring an exhibition of some pharmaceutical companies organized on the sidelines of the conference, the minister affirmed that the pharmaceutical industry in Syria is recovering.

He explained that there are 69 medicine factories operating in the country, in addition to 8 others that have been given license. A new factory will be opened tomorrow in Tartous province, he added.