The army restores security to villages in Aleppo and Lattakia 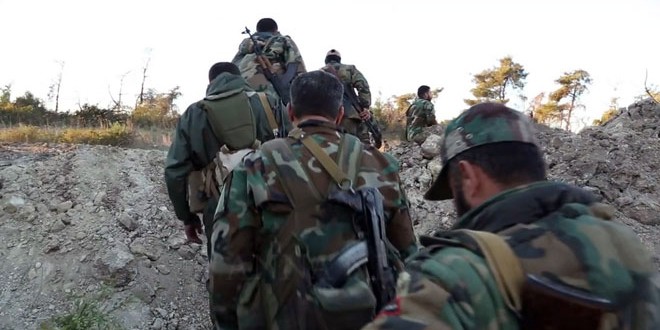 Provinces, SANA –The army units continued advancing in the eastern and northeastern parts of Aleppo, establishing control over a new village there, while units in other areas and provinces continue targeting terrorists’ positions and centers.

Army units restored security and stability to Tal Maksour village in the northeastern countryside of Aleppo province, a military source announced on Sunday.

The source noted that military engineering units later combed the area and dismantled a number of explosive devices and landmines which terrorists had earlier planted in the area to prevent the army’s advance.

Intensive operations were carried out against gatherings of ISIS terrorists and their fortifications to the west of Afash village and in Abu Danneh and Rasm al-Alam in the eastern countryside.

Centers and vehicles were destroyed and a number of terrorists were killed during the operations, the source confirmed to SANA.

Hideouts of terrorists were also hit in al-Ameriyeh village in Tal al-Daman area, southeast of Aleppo city. Several terrorists were reported killed or injured, and a number of vehicles and weapons were destroyed.

The army also targeted positions and weapons for Jabhat al-Nusra and groups linked to it in the neighborhoods of al-Rashidin, Beidin, al-Ashrafiyeh, al-Ansari and al-Kallaseh and al-Shqeif area on the northern outskirts of Aleppo city.

In the meantime, an army unit fired intensively at terrorists’ hideouts in Hayyan town in the international highway leading to Turkey.

Units of the army and armed forces continued operations against terrorist organizations in Daraa and its countryside.

The continued army operations against hotbeds of Jabhat al-Nusra terrorists and other terrorist organizations in Daraa al-Balad resulted in destroying positions of terrorists in al-karak and al-Seibeh neighborhoods and a vehicle to the south of al-Abasiyeh in addition to a bulldozer to the east of Daraa dam and the electricity company.

Based on accurate information, another army unit launched strikes against a den inside which a terrorist group was fortified in a farm in Um Walad village in the eastern countryside during which it was destroyed along with all terrorists inside.

The army’s air force destroyed a convoy of oil tankers for ISIS in a raid to east of Sha’af village in Sweida countryside.

Field sources told SANA that a unit of the army killed 12 terrorists in Kharabu region in eastern al-Ghouta of Damascus countryside.

The sources added that among the dead terrorists were Fares Diab, Ammar Malak and Andul-Rahman al-Sheikh.

The Army Air Force destroyed gatherings and positions of ISIS terrorists in al-Qariyatein, the area surrounding al-Shaer field and al-Baiyrat in the eastern and south eastern countryside of Homs.

An army unit destroyed dens and gatherings of terrorist organizations in Um Sahreej village 73 kilometers to the east of Homs.

Army units destroyed dens, arms and munitions for terrorists in al-Rmeileh on Mhein al-Qareitain direction and in Tulol al-Soud in the area surrounding al-Qarietain 82 kilometers to the south east of Homs.

Army units inflicted heavy losses in personnel and munitions upon Jabhat al-Nusra terrorists and other terrorist organizations during strikes against their gatherings and dens in Um Sharshouh and Tal Abu al-Sanabel to the north of Homs.

Army units launched concentrated strikes against movements of terrorist organizations in Kafarlaha and al-Teibeh al-Gharbieh in al-Houleh area 27 kilometers to the North West of Homs.

The army’s air force destroyed vehicles and equipment for terrorists of ISIS in a raid against their positions in al-Rishdya and al-Hweikah to the north of Deir Ezzor.

The raids also destroyed dens for the terrorist organization in al-Bgheliyah to the west of the city.

Army units, in cooperation with popular defense groups, restored security and stability to Taomeh village in Kansaba area in the northeastern countryside of Lattakia, after destroying the last hideouts and fortified positions of terrorists in it and inflicting heavy losses on them, sending the remaining terrorists fleeing to areas near the Turkish borders.

The army’s engineering units dismantled explosive devices left behind by terrorists in the village.