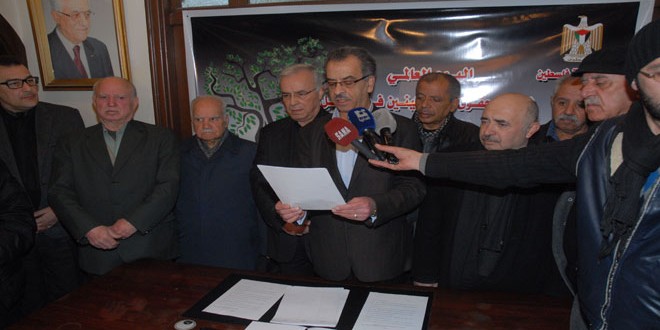 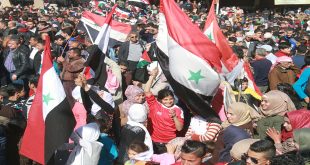 Locals of Ghouta stands in solidarity with Syrian Arab Army 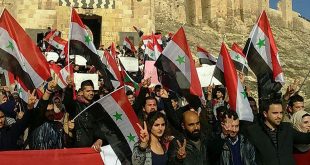 Solidarity stand in Aleppo rejecting US intervention in Syria 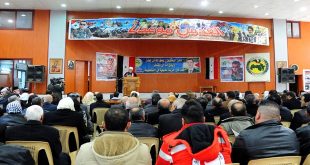 Solidarity stand in support of Palestinian cause in Jdeidat Artouz

Damascus, SANA- Marking the International Day for supporting the rights of Palestinian in the territories which Israel occupied in 1948, representatives of a number of Palestinian and Syrian national parties, political forces and civil society establishments organized on Saturday a solidarity stand at the Palestine embassy to condemn the racial practices of the Israeli occupation against Palestinians in the occupied Territories.

Participants in the stand addressed two letters to the Secretary-General of the United Nations and the High Commissioner for Human Rights in which they called for putting pressure on the Israeli occupation government to force it to stop the policy of racial discrimination against the Palestinian people.

Participants in the stand stressed the need that the Palestinians get their rights as guaranteed by all rules of international humanitarian law, particularly the right of return.

In a statement to SANA, senior Advisor at the Embassy of Palestine Imad al-Kurdi said that the Israeli occupation practices under suspicious international silence the ugliest forms of repression, discrimination and criminality against the Palestinians.

In turn Abdul- Ghani Hallo, member of the Political Bureau of the Democratic Front for the Liberation of Palestine said that the uprising that occupied Palestine witnesses reflects the will of the Palestinian people and their determination to continue resistance until the full rights are gained.

For his part Dr. Sameer al- Rifai representative of the Palestinian National Liberation Movement in Syria said that Israeli practices against the Palestinians of the occupied territories in 1948 aim at pushing them to leave their homeland to achieve the dream of establishing the so-called the Jewish state.