New areas in Hama, Lattakia and Aleppo under the army’s control-VIDEO 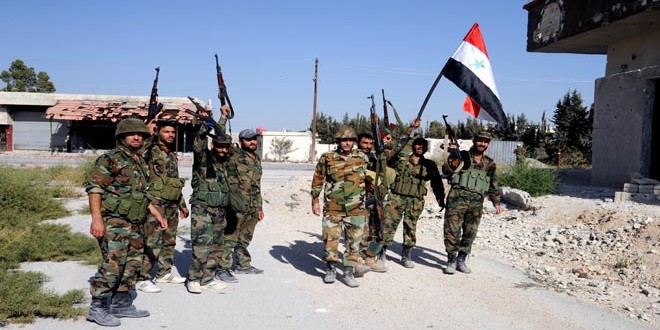 Provinces, ,SANA-More areas in different Syrian cities have come in the army’s hands on Saturday as its units intensified operations against terrorist organizations, leaving many of their members dead and their vehicles and equipment destroyed.

Army units restored security and stability to Tannouzeh village northwest of the Air Force Academy and to Afash village in the eastern countryside of Aleppo, a military source announced on Saturday. Mines and explosive devices left behind by the terrorists were removed and dismantled.

Earlier, army units fired intensively at centers and fortifications of ISIS terrorists in the villages of Jeb al-Safa- al-Seen, Jeb Ghabsheh and Tal Maskour in the same countryside.

The centers and sites with terrorists, weapons and vehicles equipped with machine guns present were all destroyed, the military source confirmed in a statement to SANA.

In the northern countryside, gatherings of terrorists were targeted, with their vehicles getting destroyed, in Hayyan town and Retyan village.

Inside the city, terrorist targets were hit in al-Lairamoun and Salah-Eddin neighborhoods.

Units of the army and the armed forces restored security and stability to the villages of Kabaseen and al-Zankahyia in the northeastern countryside of the central Hama province.

The source added that units of the army, in cooperation with the popular defense groups, carried out intensive operations over the past 24 hours and restored stability and security to the two villages to the northwest of al-Sa’an town in the northeastern countryside.

The army also combed the villages of Kabaseen and al-Zankahyia and dismantled the landmines and explosive devices planted by the Takfiri terrorist organizations after eliminating their last gathering in the villages as the remnants of the terrorists fled and left their arms and ammunition.

Meanwhile, units of the army in cooperation with the popular defense groups clashed with terrorist groups that infiltrated into the surrounding of the military points in the villages and towns of al-Bouaida, al-Masasna, al-Zalakyiat and Jubain in the northern countryside.

Heavy losses were inflicted upon the terrorists in the clashes in the arms and personnel as 15 of their machinegun-equipped vehicles and 5 of their armored vehicles were destroyed, in addition to seizing a number of vehicles and a bulldozer.

Army units in cooperation with popular defense groups restored security and stability to al-Rweiseh al-Sharqieh and Nawarah village in the northern countryside of Lattakia.

The army’s engineering units are canvassing the areas and dismantling IEDs and landmines left behind by terrorists.

Army units destroyed positions, arms and munitions for terrorists in Kabaneh village in the north eastern countryside of Lattakia.

The intensive strikes which were carried out by the army units against axes of movements of terrorist organizations in the mentioned village which is located between Idleb and Lattakia resulted in destroying vehicles equipped with heavy machine guns along with all terrorists on board.

In eastern Syria, an army unit clashed with a group of ISIS terrorists who infiltrated the surroundings of al-Rushdiyeh neighborhood in the city of Deir Ezzor.

A filed source told SANA that the terrorists, who are mostly foreigners, suffered heavy losses as some of them were killed or injured and the rest fled and two of their heavy machinegun-equipped vehicles were destroyed.

Another army unit destroyed ISIS positions and fortifications in al-Huweiqeh neighborhood on the northern outskirts of Deir Ezzor city.

Army units at the site of Deir Ezzor Airport targeted and destroyed several ISIS hideouts, killing the terrorists present at them and destroying their weapons and ammunition.

Gatherings and positions of ISIS terrorists were also hit by an army unit in al-Bgheiliyeh village in the northern countryside of Deir Ezzor province.