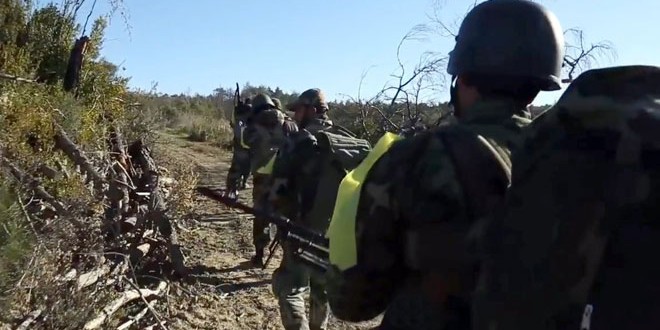 Provinces, SANA – More positions for terrorist organizations were destroyed in continued operations carried out by the army units, backed by the Air Force. Many terrorists are being killed and their equipment destroyed as a result of the operations.

Five centers for the terrorists and a number of their vehicles and weapons were destroyed in the airstrikes.

More hideouts and vehicles for ISIS terrorists were destroyed in the surroundings of Palmyra and to the south and west of al-Qaryatain village in the eastern and southeastern countryside of Homs province.

The strikes resulted in the death of a number of ISIS terrorists and the destruction of their ammunition.

The Syrian Air Force destroyed two vehicles equipped with machineguns and killed 45 terrorists in the villages of Oum Dimneh, Jeb Ghabsheh, and Jeb al-Kalb near al-Bab city in Aleppo province.

The Air Force also carried out several sorties targeting ISIS concentrations in Abu Henna hill, al-Seen, Zanoura, Maksour hill, Ein al-Jahesh, the surroundings of al-Hattabat hill, Jub al-Safa, and the surroundings of the thermal stations in the province’s eastern countryside, which resulted in killing and injuring a number of terrorists and destroying their fortified positions and vehicles.

Three centers for Jaish al-Fateh terrorists were destroyed in Syrian Air Force airstrikes in Nahlia village in Ariha area in the southern countryside of Idleb.

The Air Force also destroyed another center for terrorists in al-Tamanaa in the southern countryside, in addition to destroying fortified positions and vehicles and killing terrorists in airstrikes on concentrations of Jaish al-Fateh 8 kilometers west of Idleb city.

Two vehicles equipped with heavy machine guns and two centers for Jabhat al-Nusra terrorists were destroyed in Mourek in the northern countryside of the neighboring Hama province.

Hideouts and movements of terrorists were hit in army airstrikes in Lahaya, Atshan, Maarakbeh and Kafrnabboudeh in the northern and northwestern countryside. A number of terrorists were killed or injured and vehicles with heavy machine guns mounted on them were destroyed.

The army’s air force destroyed a number of hideouts and centers for ISIS terrorists in al-Bgheiliyeh and al-Jneineh in the countryside of Deir Ezzor.

Vehicles equipped with heavy machineguns were destroyed in the army airstrikes.

Army units destroyed terrorists’ dens in al-Bajaja area and eliminated their gatherings during accurate strikes against terrorist organizations in al-Nazihin Camp and the southern part of al-Manshia neighborhood in Daraa al-Balad in Daraa province.

The Army also carried out special operations against terrorists’ hideouts in al-Yadoda town to the northwest of Daraa, killing many terrorists, injuring many others and destroying their weapons and vehicles.

An army unit, in cooperation with popular defense groups, thwarted a terrorist group’s infiltration attempt to one of the military checkpoints in Tal al-Koroum and Tal al-Bazak to the east countryside of Quneitra province.

A field source told SANA reporter that the army clashed with the terrorist group members who are affiliated to Jabhat al-Nusra, killing a number of terrorists, injuring many others and destroying a number of their vehicles, some of them equipped with machineguns.

The source added that another army unit destroyed hideouts and sites of Jabhat al-Nusra in Mashara, Um Batina and Nab’a al-Sakhar villages, killing all terrorists who were inside them, including a number of terrorists’ leaders.

Later, the source said that army units, in cooperation with popular defense groups, restored security and stability to the villages of al-Qalai’e, Karoura, al-Qastal, Bashoura, and Beit Dedo and to the mountains of Bradon, Bardon, al-Qala’a, and al-Khedr in Lattakia’s northern countryside.

The source added that army killed number of terrorists, injured many others and destroyed their fortified positions and weapons.

The Army engineering units are combing the area, dismantling a number of explosive devices and landmines which terrorists  planted earlier.