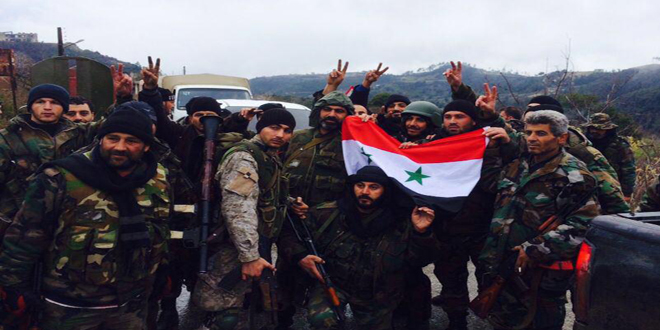 Provinces, SANA – More areas in Lattakia and Aleppo have come in the army’s hands as its units intensified operations against terrorist organizations, leaving many of their members dead and destroying their vehicles and equipment.

The source added that the engineering units are combing the area and dismantling the explosive devices and landmines planted by the terrorists, some of them were killed and injured by the army operation, who fled towards Turkey.

Earlier on Saturday, Army units, in cooperation with popular defense groups, established control over the villages of al-Tefahiya, Hilwa al-Gharbiya, Hilwa al-Sharqiya, al-Amlik, Beit Arab, Beit Ablaq, and Tal Asholan along with all the hills surrounding them in Lattakia’s northern countryside.

In the same context, army units established control over the villages of Katar and Tal Hattabat  in the eastern countryside of Aleppo province.

A field source noted in a statement to SANA that the units took control of the aforementioned areas after fierce clashes with ISIS terrorists, during which a number of their fortifications and barricades were destroyed and dozens of them were killed, while the others fled.

Military engineering units later swept the two villages and dismantled the explosive devices and mines left behind by the terrorists, the source said.

Army units destroyed an armored vehicle in al-Nazihin Camp neighborhood in Daraa city and killed a number of terrorists and destroyed their arms and ammunition in the neighborhoods of al-Manshiyeh and Daraa al-Mahatta.

At the northern entrance of Daraa city, an army unit killed all members of a terrorist group and destroyed their equipment and arms in Atman town, 4 km away from the city’s center.

The terrorist organizations acknowledged on their social media pages the death of 15 terrorists in al-Sheikh Miskeen in the northern countryside of Daraa province, including a military leader within the so-called “Saif al-Sham Brigades” who is nicknamed Abu al-Ghaith.

At the northern entrance of Daraa, a unit of army killed a number of terrorists, injured others and destroyed their arms and munitions during concentrated strikes against their fortifications in Ataman town 4 kilometers from the city center.

Other army units launched concentrated strikes against dens and gatherings of terrorist organizations in Daraa al-Mahatta and in the surroundings of the post office in Daraa al-Balad.

The strikes destroyed dens and vehicles for terrorists, some of which were equipped with heavy machine guns and a number of terrorists were killed or injured.

Army and Armed Forces units destroyed a bulldozer used by ISIS terrorists near Palmyra (Tadmur) in the direction of al-Bayyarat and an amount of their weapons and equipment in Fwaiset al-Fawares in al-Bayyarat in the eastern countryside of Homs province.

A military source told SANA that the army targeted ISIS hideouts and concentrations in Rahoum village 105 km east of Homs city, resulting in destroying some of the terrorists’ vehicles.

Another army unit destroyed ISIS vehicles in strikes on their hideouts and movements in al-Tuloul al-Soud area in al-Qaryatain 82 km southeast of Homs, while other units targeted hideouts and concentrations of Jabhat al-Nusra and other terrorist organizations in Talbiseh and al-Ghanto in the province’s northern countryside, destroying a number of their hideouts, vehicles, weapons, and equipment.