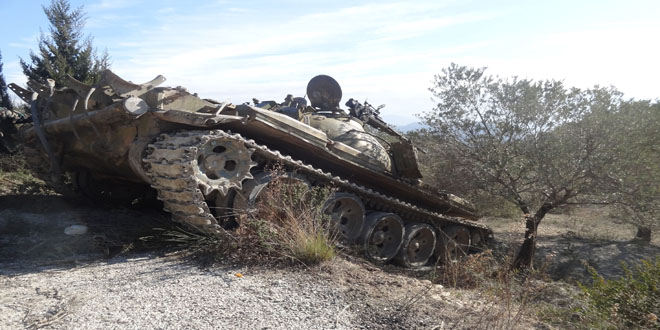 Provinces, SANA – The army units have killed more members of terrorist organizations and destroyed their equipment and hideouts in continued operations in various areas across the country.

An army unit and the popular defense groups established control over a number of strategic hills and heights, including Thaniet Rashed, in the eastern countryside of Homs province and cut off ISIS terrorists’ supply routes from al-Mahasseh to al-Qaryatain, a military source announced.

Security forces destroyed a den for the terrorist organizations in Harasta in al-Ghouta, Damascus countryside.

Army units destroyed a center for Jabhat al-Nusra terrorists and a vehicle moving in Bosra Square in Daraa al-Mahatta neighborhood in Daraa city, while another unit killed all members of a terrorist group in al-Sheikh Miskeen town, 22 km to the north of the city.

Army operations during the past 24 hours concentrated on positions of ISIS terrorist organization in al-Sbeihiyeh village in Aleppo province, where three vehicles equipped with heavy machineguns were destroyed.

Several gatherings for Jabhat al-Nusra-linked terrorist groups were targeted in al-Sheik Lutfi village and al-Rashidin area on the southern outskirts of Aleppo city. Four vehicles and a number of hideouts with arms and ammunition inside were destroyed as a result of the operations.