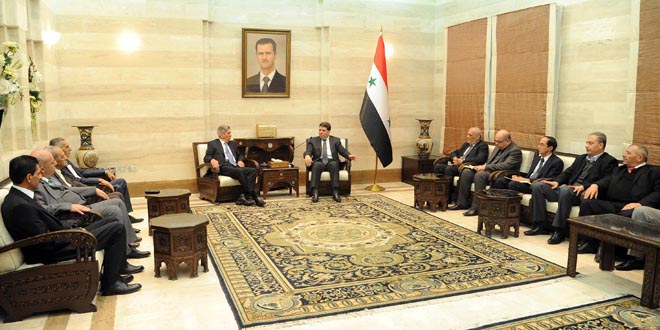 Damascus, SANA – Prime Minister Wael al-Halaqi affirmed on Monday the important role of Arab syndicates and political forces that are committed to the Arab nation’s issues in bolstering society against the Takfiri mentality and reviving the sense of nationalism and Arab solidarity.

During a meeting with a Jordanian delegation that includes lawyers, political activists, and representatives of political parties and social activities, al-Halaqi stressed the need for Arab lawyers to help in prosecuting all those who contributed to the global terrorist war waged against Syria and participated in looting and destroying its resources, hailing the supportive stances of Jordanian syndicates and social associations towards Syria and its people.

He also stated that Syria has been able to confront to the global terror war thanks to the cohesion of its people, army, and leadership and to the support provided by its friends, underlining the challenges facing Syria’s economy and the government’s efforts to provide the citizens’ needs.

In turn, Assistant Secretary General of the Arab Lawyers Union Samih Khreis said that Syria is facing the US-Israel project in the region, and by doing so it is defending the Arab identity, voicing confidence that Syrian people will achieve victory.

The delegation also met Assistant Regional Secretary of Al-Baath Arab Socialist Party Hilal al-Hilal, who asserted the need to boost Arab solidarity to confront plots targeting the region, and that Syria values the delegation’s visit and the nationalist positions of Jordanian organizations and parties who supported Syria since the beginning of the war imposed on it.