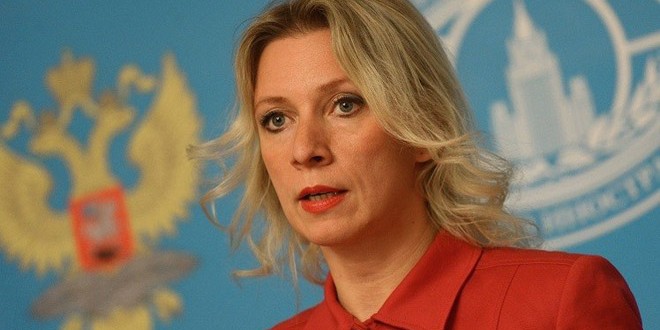 Moscow, SANA-Russian Foreign Ministry spokesperson Maria Zakharova called on all countries to support the political settlement for the crisis in Syria and to prevent the spread of terrorist organizations in the region.

During a press conference on Thursday in Moscow, Zakharova announced that a meeting will bring together the Russian Foreign Minister Sergei Lavrov and US Secretary of State John Kerry to discuss a settlement to the crisis in Syria in a “objective and comprehensively way”.

She considered that the most important thing had been achieved late last year in relation to the crisis in Syria by Russia, US and other countries wherein an agreement has been reached about the importance of focusing attention on a political settlement to the crisis and considering the fight against terrorism a top priority.

Zakharova reaffirmed her country’s stance that the fate of the President Bashar Assad is a Syrian matter, pointing out that this issue has not been discussed in Vienna or in New York.

She also refuted the French, US and Turkish claims about targeting civilians during the Russian air operations against terrorists’ sites in Syria, noting that these claims are not based on evidence.

Talks during the meeting also tackled the issue of holding comprehensive dialogue between representatives of the Syrian government and opposition according to UN Security Council resolution No. 2254.

The Russian Foreign Ministry said in a statement that the two sides exchanged viewpoints on the situation in Syria and means of realizing a political settlement to the crisis in the country.

Lavrov to meet Kerry on January 20th to discuss Syria

In a relevant context, the Ministry said that Russian Foreign Minister Sergey Lavrov will meet his US counterpart John Kerry on January 20th in the Swiss city of Zurich to discuss a settlement for the crisis in Syria