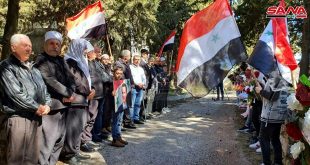 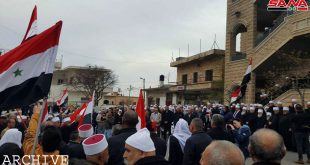 Quneitra, SANA- Israeli occupation authorities released the Syrian detainee Majed Farhan al-Shaer after five and a half year detention in occupation jails on charges of resisting occupation and having contacts with his home country Syria.

A crowd from Majdal Shams, al-Shaer’s occupied village, included locals and free detainees from the occupied Golan gathered to receive him before moving through all the villages in Golan and returning to Sultan al-Atrash Square in Majdal Shams where a ceremony is to be held on his honor.

Al-Shaer was detained in Israeli jails for five and a half years on charges of contacting with his home country Syria.

He suffered serious illness in his lungs and his health deteriorated during detention due to inhumane conditions and being deprived of medicine and medical services.

Fida’a al-Shaer, his son, was sentenced for three years in Israeli jails on the same charge.

His other son, Anas was expelled to Kafar Kana village in Occupied Palestine on charges of throwing stones at Israeli soldiers during commemorating the Naksa (setback) anniversary in 2011.

In turn, the Committee for Supporting the Syrian Detainees in Israeli Prisons expressed pride in al-Shaer and the locals in the occupied Syrian Golan who are steadfast and adherent to the people, army and leadership in Syria.

The Committee said in a statement on the occasion that the long years of captivity supplied al-Shaer with strength, steadfastness and sacrifice.

The statement added that freedom and victory are coming and the Zionist occupation will come to an end.

The committee expressed confidence that what Syria witnesses is doomed to failure and defeat thanks to the blood of the martyrs and unity of the Syrian people, heroism of army and the steadfastness of detainees in Israeli jail.

For his part, Quneitra governor Ahmad Sheikh Abdul-Qader said that al-Shaer achieved victory over years of captivity due to his steadfastness.