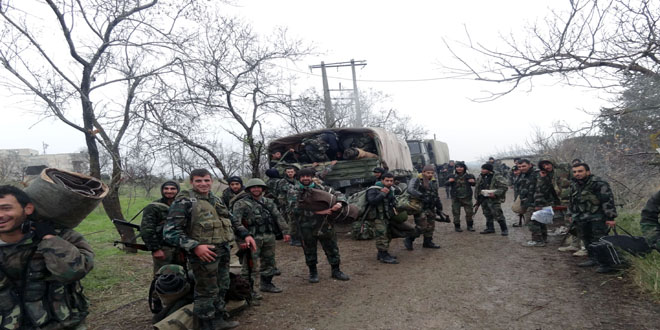 Provinces, SANA- The army , in cooperation with the public defense groups , continued its operations  across the country, assuming control of more areas, killing a number of terrorists and destroying their vehicles.

Army units, in cooperation with the popular defense groups, established full control over the suburb of Salama town and Tirtyah village in the northeastern countryside of Lattakia, a military source announced on Tuesday.

“Intensified operations” using tactics special for the rough and mountainous geography of the region were carried out in the process of assuming control of the abovementioned areas, according to the source, who affirmed that heavy losses were inflicted upon the terrorists, who are mostly from Jabhat al-Nusra and the so-called “Ahrar al-Sahel Brigade”.

The army units, the source added, later combed the areas and dismantled the explosive devices and mines planted by the terrorist organizations.

Meanwhile, field sources told SANA that increasing numbers of terrorists have been fleeing clashes with the army personnel and the popular defense groups, who have recently made significant advances in the northern and northeastern countryside of Lattakia.

An army unit, in cooperation with the popular defense groups, established control over Jarjiseh town and the area north of al-Rastan Lake in the southern countryside of Hama province.

The military source noted that a group of terrorists turned themselves in and handed over their weapons to the army in the same area.

The army destroyed ISIS gathering in Atashan, 10 km north of Hama city, and destroyed two vehicles in the area between al-Lataminah and Lahaya, a number of terrorists were killed in the process.

In Idleb countryside, the army killed 25 terrorists from Jabhat al-Nusra and Ahrar al-cham in al-Tamana’a and Maarat al-Numan in a special operation against their gatherings, in addition to destroying three dens.

Meanwhile, 11 other terrorists were killed in Sarmada to the north of Idleb.

An army unit targeted terrorists in Saraqeb city and killed at least 5 terrorists.

A unit of the army killed more than 20 terrorists in an ambush in al-Jalmouz area in the northern countryside of Homs.

The army also targeted terrorists’ gatherings and concentrations in Umm Sharshouh and Keisin, killing a number of terrorists and destroying their weaponry.

The army also carried out “precise” operations against terrorists in the surroundings of the Scientific Research Center’s building, the Journalists Association and al-Mansoura village on the western outskirts of Aleppo city, killing a number of terrorists and destroying their weapons, ammunition, equipment, including vehicles equipped with machine guns.

Other army units fired intensively at sites and gatherings of ISIS terrorists in al-Bab city and Tadef town in the eastern countryside of Aleppo province, killing many terrorists, injuring others and destroying vehicles, some equipped with heavy machineguns.

In the southern province of Daraa, an army unit carried out “precise operations” against terrorists’ fortified positions in Daraa al-Mahatta neighborhood in Daraa in Daraa city.

A command leader was destroyed to the southwest of al-Nazihin Camp in the neighborhood as a result
of the operations.

Meanwhile, another army unit inflicted losses upon terrorists in the southern side of al-Manshiyeh area in Daraa al-Balad neighborhood in the city.

The army also carried targeted a gathering of Jabhat al-Nusra terrorists in Atman town, 4 km to the north of Daraa city.

The terrorist organizations posted on their social media WebPages the death of the so called “Abu Raghad” one of the Jabhat al-Nusra prominent leaders in Hawran, clarifying that he was shot and killed by unknown side in Um al-Mayathen town, 10 km southeast of Daraa city.

Further, the terrorist organizations acknowledged that they suffered heavy losses in equipment and weaponry in al-Sheikh Miskeen city in addition to killing five of their members where the army is fighting terrorists.