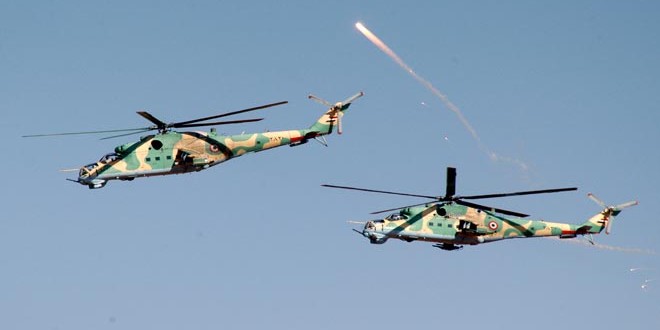 Provinces, SANA The Syrian Army air force carried out sorties on terrorist organizations targeting their positions, hotbeds and hideouts in many areas across the country, eliminating a number of their members and destroying their weapons, ammunition and vehicles.

The Syrian Air Force carried out sorties on positions and fortified sites for the Islamic State in Iraq and Syria (ISIS) in the west side of al-Qaryatain city in the southeastern countryside of Homs province.

A military source told SANA on Sunday that the airstrikes destroyed ISIS positions along with all terrorists inside them along with machineguns-equipped vehicles.

Later, the source said that army units destroyed ISIS hideouts and vehicles, some of which were equipped with machineguns, in al-Rmaila mountain, Tuloul al-Soud, and Tar al-Kharouba in the surroundings of al-Qaryatain.

Other units targeted ISIS bases in al-Antabli farm, the surroundings of Shaer field, the Palmyra (Tadmur) triangle, and Rahoum in the far eastern countryside of the province, in addition to inflicting losses in equipment and personnel on Jabhat al-Nusra terrorists and destroying their weapons and equipment in Ezzeddin village and Alwan farm in the northern countryside.

Meanwhile, terrorist organizations acknowledged on their social media pages the death of terrorist nicknamed Abu Bilal al-Homsi, the planner of the recent terrorist bombings which took place in al-Zahra neighborhood in Homs city and claimed the lives of a number of civilians and injured others.

In the northern Aleppo province, the Syrian army air force carried out, during the last 24 hours, airstrikes against the Islamic State in Iraq and Syria (ISIS) terrorist organization’s positions and movements in the village of Nejarah in the eastern countryside of the province.

Meanwhile, the terrorist organizations acknowledged on their social media pages the killing of a number of their members, among them Hassan al-Haj Omar and Abdel-Aziz Ahmad Abdel-Aziz.

In the southern province of Daraa, the army units established full control over 60% of the city of al-Sheikh Miskeen and seized vantage points viewing all of the city neighborhoods, a military source told SANA.

The source said dozens of terrorists were killed or injured and scores other fled the city towards Ibtaa and Nawa.

An army unit carried out accurate operations on gatherings and positions of Jabhat al-Nusra and other terrorist organizations in Tareek al-Sad neighborhood in Daraa, destroying their hideout and killing all the terrorists inside it, the military source added.

A hideout for the terrorists and two of their vehicles in addition to another vehicle were destroyed in army operations against terrorists’ gatherings and movements at the west side of Daraa al-Balad.

Later on Sunday, an army unit carried out operations against dens and fortified positions of terrorist organizations in the southern side of al-Manshiyeh and al-Arbayeen neighborhoods in Daraa al-Balad, killing a number of terrorists from “Jund al-Farooq” terrorist group.

Meanwhile, terrorist organizations acknowledged on their social media pages killing a number of their members as they have acknowledged receiving severe blows in al-Sheikh Miskeen city during the past three days, with at least 50 of their members dying and 250 more being injured, 50 of them in critical conditions.

Army units killed a number of terrorists, including a group’s leader, and destroyed at least 5 vehicles in Atashan village in Hama countryside, field sources told SANA.

The army also killed 18 terrorists and destroyed 3 vehicles loaded with weapons and ammunition in strikes against the terrorists’ hideouts and concentrations in Maarat al-Numan, al-Hamidyeh, Hass and Bseida in Idleb countryside.

In Sweida province, an army unit, in cooperation with popular defense groups, thwarted a terrorist attack launched by a terrorist group against Bard village some 26 Kms to the south of Sweida city.

All terrorist group members were killed and injured and their weapons and ammunition were destroyed in the army operation, the military source confirmed.