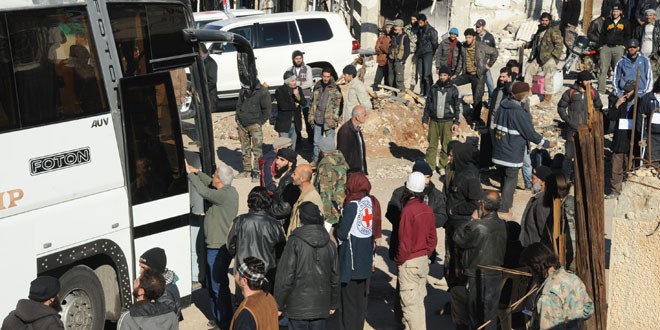 Damascus, SANA – The process of moving some 300 families from the besieged towns on al-Foua’a and Kafraya in Idleb was completed on Monday, under supervision of the UN, the Syrian Arab Red Crescent (SARC) and the International Committee of the Red Cross (ICRC).

The two towns, located around 10 km north of Idleb city, have been besieged by terrorists for around two years, and have been targeted with hundreds of rocket shells and several attempts to infiltrate them, attempts that were foiled by locals and defense committees.

In parallel with this, the process of moving injured gunmen and their families out of al-Zabadani city in Damascus countryside was also completed under UN, SARC, and ICRC supervision.

Earlier, SANA’s reporter said that a number of buses accompanied by UN, ICRC, and SARC cars entered the city to move gunmen and their families out of the city.

The two processes were carried out as per an agreement reached last September, an agreement that was derailed by terrorists multiple times.