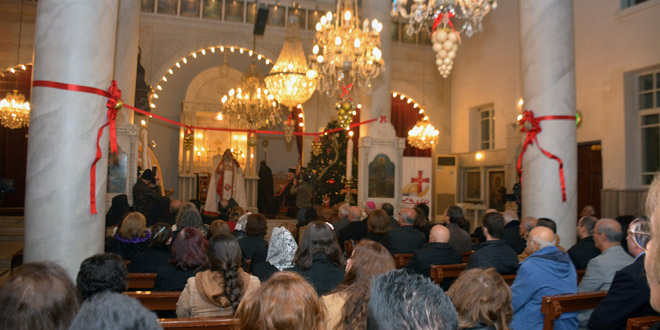 Damascus, SANA – Marking the conclusion of the year of commemorating the centennial of “Sayfo” genocide committed by Ottomans against Syriacs, a mass was held on Sunday evening at St. George Cathedral in Bab Touma district, Damascus. 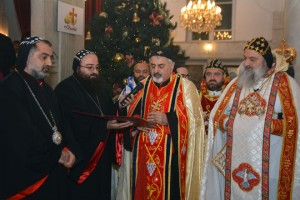 Presiding upon the mass, Syriac Orthodox Patriarch of Antioch and All East and Holy Synod of the Universal Syriac Orthodox Church, Moran Mor Ignatius Aphrem II said that the memory of the martyrs who fell at the hands of the genocides and massacres committed by the Ottomans in 1915 will live in the hearts of Syrians, especially since Syrians are now facing new threats that target not only Christian Syrians, but also Muslims who reject the dark, extremist mentality of terrorists.

Patriarch Aphrem II called on honest people and decision makers in the world to support Syrians in the face of terrorism, praying for the souls of Syria’s martyrs and the Sayfo martyrs.

In a sermon delivered at the mass, Syriac Catholic Patriarch of Antioch, Mar Ignatius Joseph III Younan, said that this centennial is an occasion fraught with pain and sadness, but pride in the sacrifices of the Syriac people trumps pain and sadness, noting that Syriacs, along with the Armenians, Chaldeans, Assyrians, and Greek Orthodox have fallen victim to massacres committed by the Ottoman Empire all because they wanted to follow their faith in their homeland, adding that the shameful thing is that those massacres took place in recent history in full sight of the world.