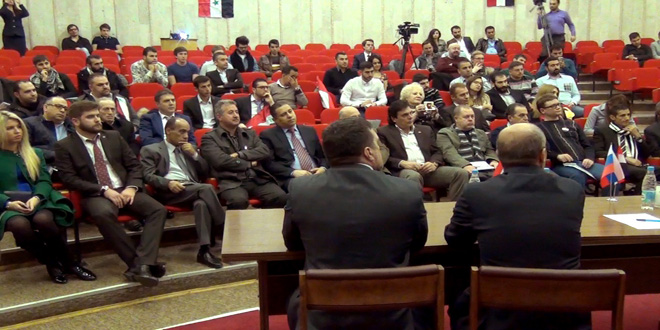 Moscow, SANA The Syrian Embassy in Russia and the Syrian students in Russia and the Commonwealth of Independent States (CIS) held Sunday an activity under the title Thanks Russia.. We will triumph Together in appreciation of Russia’s supportive stances to Syria in its war against terrorism.

In a speech at the event, Anti-Globalization Movement of Russia (ADR) leader Alexander Ionov said We, at this activity which brings together representatives of the friendly peoples of Syria and Russia, reiterate the necessity of confronting terrorism. Ionov reiterated Russia’s principled and constructive stances in supporting Syria since the beginning of the terrorist war against, hailing the Russian President Vladimir Putin’s decision of sending air force to Syria to support the Syrian Arab Army in fighting terrorists’ positions.

He pointed out that what is happening in Syria is a war for combating terrorism led by the Syrian Army in order to save the country and the world, calling for eliminating terrorism in Syria before it extends to reach the Gulf countries and the United States.

For his part, Head of the Association of the Russian Officers, Who Formerly Served in Syria, Valery Anisimov held the US and the western countries responsible for supporting the terrorists in Syria. He said that Syria is not only fighting the Islamic State in Iraq and Syria (ISIS) or other terrorist organizations, but it confronts the US and its allies in the region and the world, adding Syria is fighting on behalf of the whole world and as well as of Russia.

In his speech at the event, Syria’s Ambassador in Russia Riyad Haddad thanked Russia, its People, government and leadership, as well as the CIS countries for the victory of the international law and humanity and keenness for the UN charters. Haddad criticized the unserious Western Alliance led by the US under the title of fighting the ISIS terrorism, asserting that eliminating terrorism is a humanitarian, national and ethical need.