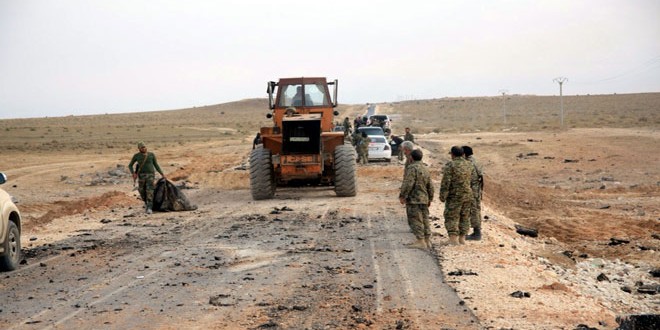 The army and armed forces units established full control over the road linking Aleppo, Khanaser, Athriya and al- Salamiyeh, after inflicting heavy losses on the Islamic State in Iraq and Syria (ISIS) terrorist organization in personnel and equipment.

A military source told SANA that the road has become completely safe after the army combed it and dismantled explosive devices planted by ISIS terrorists before they were killed or fled due to the army operations.

Meanwhile, field sources told SANA that the road will be open for citizens as of Thursday morning after the maintenance workshops repair the damage affected the road at the hands of members of the extremist organization.

A unit of the army, in cooperation with popular defense groups, established control on the hills of al-Hazm al-Thana in Homs countryside.

Earlier, the Syrian army air force killed scores of ISIS terrorists and destroyed their arms in Maheen and al-Qaryatain and in the  surroundings of al-Shaer oil field in the countryside of the central Homs province.

The Syrian Air Force targeted terrorists’ hideouts in Latmin, al-Lihaya, near Morek and in al-Banah in Hama’s northern countryside, killing a number of terrorists and destroying their machinegun-equipped vehicles.

Units of the army and armed forces carried out concentrated strikes against dens and positions of the Takfiri terrorist organizations in the southern Daraa province.

A military source told SANA Wednesday that a unit of the army and armed forces killed a number of Jabhat al-Nusra terrorists and injured others, and destroyed one of their vehicles to southeast of the Post Building in Daraa al-Balad neighborhood.

The Syrian Army Air Force killed and injured a number of ISIS terrorists after targeting their hideouts in al-Jafra, Hweja, al-Mari’ya and al-Tabyyeh in the countryside of Deir Ezzor province.

A military source told SANA that an army unit established control over al-Fark Mountain in the northern countryside of Lattakia after killing a number of terrorists and destroying their arms and equipment.

The army’s engineering units set out to dismantle mines and explosives that terrorists planted. 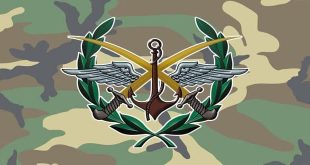