International Forum of the ME Policies discusses Fighting terrorism in Syria 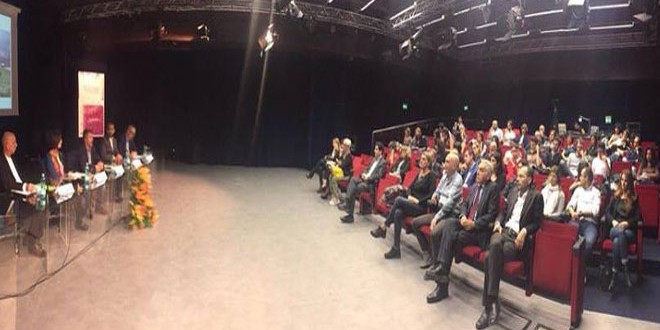 Rome, SANA Talks of the 3rd International Forum of the Middle East Policies in the Italian city of Cagliari, concentrated on the importance of the war against terrorism in Syria and means of facing the misleading and fabricated news adopted by the western mass media.

The forum was organized by the Italian-Arab Center for Friendship in cooperation with the national Forum for Peace in Syria on Monday.

Head of the Center Raymundo Schiavone stressed the center’s role in uncovering the mysteries of the crisis in Syria, calling Europe for playing a role in the crisis in Syria by helping Italian journalists to go to Damascus and convey the truth of what is going there.

Rome Melkite Archimandrite Father Mtanios Haddad, stressed importance of Syria’s historical and cultural role, hailing the coexistence and unity among all spectrums of its people.

Haddad reiterated the need of facing the conspiracy hatched against Syria and all attempts of displacing the Syrians with the aim of evacuating the Middle East of its Christians.

He condemned the European countries’ contradicted stances in dealing with the crisis of Syria, through imposing sanctions on the Syrian people, asserting the importance of supporting the Syrian army, people and leadership for protecting Syria’s sovereignty and security.

For his part, Iraqi Ambassador to Vatican Habib Mohammd Hadi al-Sader stressed, in a letter addressed to the Forum, the importance of unifying efforts and supporting the two Iraqi and Syrian armies in facing terrorism endangering the regional and international peace and security.

Accusing European Union of committing lots of mistakes in dealing with the Middle East issues, President of Sardinia Bank Antonell Caprice called the EU for playing an active role in finding solutions to the crisis in Syria and Iraq.