Antonov: Russian Air Force is constantly in touch with Syrian Army regarding airstrikes against ISIS 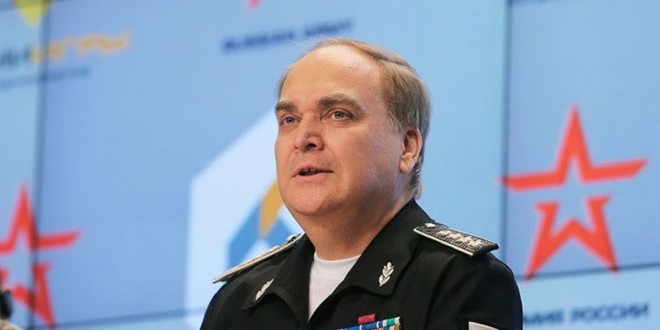 Beijing, SANA- Russia’s Deputy Defense Minister Anatoly Antonov on Saturday stressed that the Russian Air Force is constantly in touch with the Syrian Arab Army with regard to the airstrikes it conducts against the Islamic State (ISIS) and other terrorist organizations in Syria.

Antonov, speaking at the 6th Xiangshan Security Forum in China, said “”We are constantly in touch with the Syrian army. All of our strikes are surgical and delivered with precision exclusively against Islamic State infrastructures. We have not hit any other military or civilian facilities, let alone communities and mosques, contrary to what some western media have been claiming.”

Antonov referred to the joint information center which has been established in Baghdad to coordinate action among the staffs of the Iranian, Iraqi, Syrian and Russian armed forces.

He said that Russia has invited the US to enter into a wider cooperation over Syria, but Washington still looks unprepared for that.

Antonov affirmed that Russia’s participation in military operations against terrorism is being done in strict compliance with the international law.

He added that Russia responded to the request of the Syrian Government, which is fighting the ISIS terrorist organization, as the Russian leadership made a decision to extend military and military-technical assistance to Syria.

On September 30th, the Russian air force started to carry out airstrikes against positions of the ISIS terrorist organization upon the request of Syria.