President Putin: It is a grave mistake to not coordinate with Syrian government and army 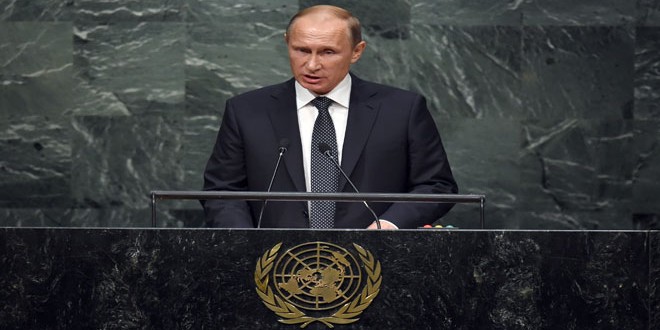 New York, SANA-Russian President Vladimir Putin affirmed on Monday that his country will continue combating terrorism, offering military assistance to Syria and Iraq and other countries which confront terrorism, saying that the danger of terrorism is mounting due to the policies of the West in Syria.

“We are witnessing regions in the Middle East and North Africa where terrorists and extremists flow to, under the motto of the so called the Islamic State… the same developments are seen in Syria through the support offered to the so-called moderate opposition where they are trained and armed, then they shift to the Islamic State which develops and transfers to different regions,” President Putin said in a speech at the UN General Assembly meeting.

“Russia has always been combating terrorism with all its forms, and today we are offering military and technical assistance to Iraq, Syria and other countries which fight terrorism… I believe there is a grave mistake to not coordinate with the Syrian government and army which confront terrorism,” President Putin said.

He added that all should recognize that there is no other active force that confronts the Islamic State (ISIS) and other terrorist organizations on the Syrian territories except the Syrian army and the Kurdish popular defense groups.

President Putin: There is a grave mistake to not coordinate with Syrian government and army 2015-09-28
m.eyon
Share
Previous Ala: Israeli violations of UN resolutions require prompt deterrent measures
Next Updated- Rouhani: US administration should put an end to its dangerous policies