Lavrov: Russia and U.S. have desire to work together to confront ISIS 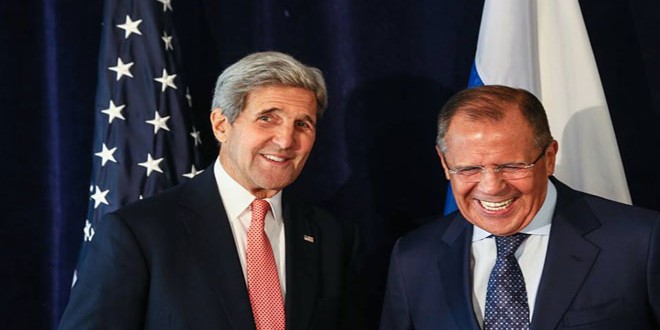 New York, SANA – Russian Foreign Minister Sergey Lavrov said that Russia and the United States have a desire to work together in diplomatic and military fields, particularly regarding the fight against ISIS.

This statement was made following a meeting between Lavrov and U.S. Secretary of State John Kerry on Sunday at New York on the sideline of the UN General Assembly meetings, during which the two discussed the crises in Syria and in Ukraine.

Lavrov said he believes that discussing these matters regularly by specialists from both sized will help resolve complicated issues.

He also stated that he and Kerry have high hopes for the upcoming meeting between Russian President Vladimir Putin and U.S. President Barack Obama, voicing hope that the two presidents will be able to find ways to move forward.

Regarding the U.S.-led alliance for fighting ISIS, Lavrov said that the only disagreement between the Russian and American sides is about practical results, adding that Russia believes that such steps must be built on solid basis consisting of the UN Charter, the approval of the states involved in this matter, and with support from the Security Council.

He added that the U.S. believes that its alliance doesn’t need approval from the Security Council, while Russia believes that this position violates international law.

Prior to the meeting with Kerry, Lavrov said in response to a question that the goal of the efforts announced by Iraq to coordinate intelligence work with Syria, Iran, and Russia is to coordinate in fighting against ISIS.