Ambassador Haddad: Syrian army is the sole force on land that confronts ISIS 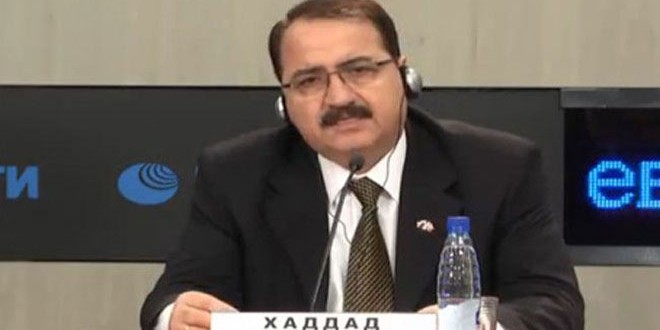 Moscow, SANA-Syria’s Ambassador in Moscow Riad Haddad said on Wednesday that the Syrian Arab army is still the only force on land in the fight against the Islamic State in Iraq and Syria (ISIS) terrorist organization.

“The Russian soldiers don’t participate meantime in the fight along with the Syrian army against ISIS, but if there was a need, Russia would send its forces to Syria,” Ambassador Haddad said in an interview with INTERFAX news agency.

He added that since the outbreak of the crisis in Syria, the Russian Support to Syria has not stopped, clarifying that the assistance offered by Russia increases, but only in the domain of combating terrorism.

On the presence of Russian warplanes and Helicopters near the coastal city of Lattakia, Haddad said “All those Russian assistance will eventually help Syria defeat terrorist organizations,” affirming that the efforts exerted by Russia in this domain are only restricted to combating terrorism.

Ambassador Haddad: Syrian army is the sole force on land that confronts ISIS 2015-09-23
m.eyon
Share
Previous A woman killed, 8 civilians injured in a terrorist explosive device blast in Homs
Next Updated-Al-Jaafari: International change on Syria prompted by the Syrian army