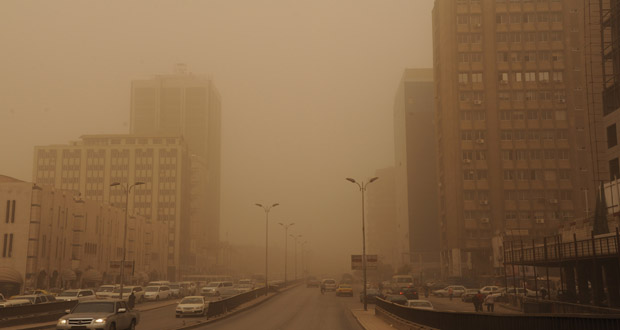 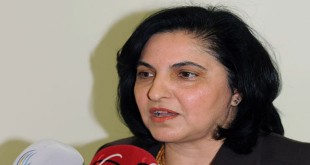 Environment Ministry: Plans for avoiding dust storms in the future

Damascus, SANA- The large dust storm sweeping the country put hundreds of people in hospitals, according to medical sources.

Three deaths and over 3580 cases of asphyxia, dyspnea, breathlessness and asthma were reported by directors of health departments in several provinces.

The deaths were recorded in al-Salamiyeh and al-Sqeilbiyeh areas in the central Hama province.

The dust storm, which hit parts of Syria late Sunday, spread to larger areas of the country on Tuesday morning.

It was however expected to gradually recede in the afternoon and in the evening hours starting from the northern areas southward.

Head of the Meteorology Department Ridwan al-Ahmed told SANA that the dust storm might continue till the end of the current week as the weather will change to become misty without dusty conditions, noting that the visibility will improve in the evening on Tuesday.

Al-Ahmed added that the phenomenon of dust is rare in Syria and the reason behind it is a superficial low air pressure in the central areas of Iraq and the eastern parts of Syria, in addition to an upper low air pressure that caused an active wind in Iraq.

He added that the dust storm moved from the eastern areas in Syria to the internal areas and during that last few hours, the dusty conditions started to affect the northeastern parts of the country and then it moved towards the south to affect Damascus and the southern areas while at midnight the effect of the storm became deep in the southern areas.

He pointed out that this week, the country will be affected by a subtropical high air pressure as the temperatures will rise and the weather will be hot in most areas, adding that the reason behind the slow recession of the storm is the high pressure which makes the weather stable and the speed of the wind weak and prevents any rainfalls.

For his part, Minister of Health Nizar Yazaji stressed that all hospitals and health centers in Syria are ready to provide the required health services for the patients which have been affected by the dust storm, particularly people with the respiratory and allergic diseases.

He called upon citizens to take all the precautionary measures to maintain their health and to visit the nearest hospital or health center if they suffer from any symptoms of shortness of breath to receive the required treatment.

He indicated that people with chronic and common diseases, particularly the respiratory diseases, in addition to the infants and the elderly are the ones who are most affected by such weather conditions, adding that hundreds of citizens have been admitted in the hospitals and health centers since the beginning of the dust storm as they have been affected by the dusty conditions, and all the required treatment services have been provided to them.

The Minister called upon health directors in all the provinces to increase the readiness of the emergency departments and of the departments of  respiratory and thoracic diseases to meet all the health needs of the patients.

The Department advised the drivers to use fog lights, check the brakes, reduce speed at the slopes and crossroads and to drive carefully to avoid any traffic accidents.