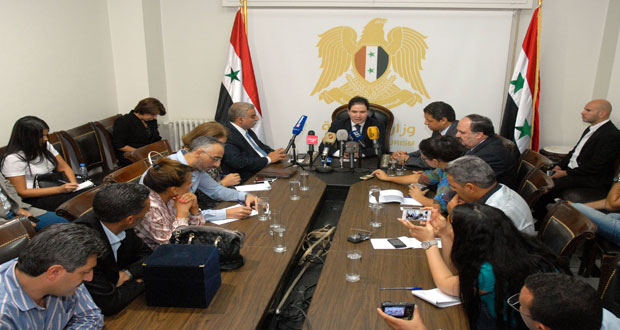 Damascus, SANA – Minister of Tourism Bishr Yazigi said that both terrorism and misleading media coverage have affected the tourism sector in Syria, adding that the Syrians’ support to their army and leadership was the bedrock to enable the country confront the terrorist war waged against it.

During a meeting with a Tunisian media delegation on Monday, Minister Yazigi said some media outlets were partners of terrorists in their attempt to undermine the country.

In turn, Director of Tourism Marketing Department at Tourism Ministry Bassam Barsik briefed the journalists on the sabotage that targeted archeological sites in Aleppo, Homs, Raqqa and Damascus.

For their part, members of the delegation stressed the need to revive the bilateral tourist relations, highlighting that they will spare no effort in conveying the reality of the events in Syrian to the Tunisian public opinion.

Hasaka, SANA- Gunmen affiliated to US occupation-backed QSD militia ran over two citizens by their …