Syrian Expatriates in Europe defy the blockade on Syrian airlines 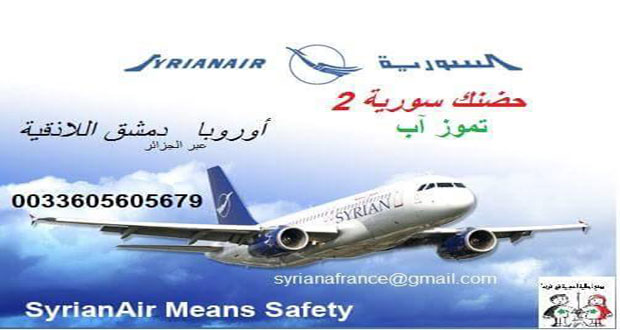 Paris, SANA- In a gesture of defiance of the blockade imposed on the Syria and in a step to support the national and social ties between expatriates and their relatives in the homeland, the second phase “Hednek Syria 2” flights kicked off Last week from many European cities to Damascus and Lattakia via Algiers on Syrian Airlines flights.

The first Phase of “Hednek Syria 1” flight had been organized in August 2014 by a delegation from the Syrian community in France, who arrived in Bassel al-Assad International Airport in Lattakia.

“The flights will be conducted on weekly basis during current July and August, where the expatriates will travel from France, Italy, Germany, Switzerland, and England to their homeland Syria,” Rima Khleifawi, one of the flights’ coordinators, told SANA.

Such initiatives, she added, aim at breaking the blockade imposed on the Syrian airlines and supporting the national economy.