Army establishes control over areas near Palmyra and in Hasaka city 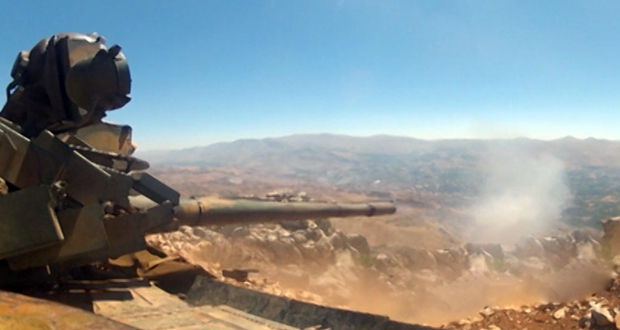 The army has lately foiled many attempts by terrorists to advance into the army’s points positioned in Jobar, Damascus countryside, killing 11 terrorists at least and injuring scores of them.

Field sources affirmed that the army units boost their positions in the surrounding of Soap factory, al-Mahafer neighborhood into Ayn Tarma and the southern highway, pointing that the clashes concentrate to the east of Maysaloun roundabout, east Manasher and near Zamalka.

The sources added that terrorist organizations in Jobar have basically resorted to dig a net of tunnels and trenches connecting Jobar with Zamalka and Erbin to smuggle weapons and munitions, a thing which made the military operations in Jobar run in the underground tunnels.
Hasaka

SANA reporter in Hasaka said Wednesday the army units, in cooperation with the Internal Security forces and the
national backup forces, established full control over al-Lailiyeh neighborhood in Hasaka city after destroying the last hideouts of ISIS terrorists in the area.

The army air force killed a number of terrorists  and destroyed vehicles equipped with machine guns in air strikes against their movements in al-Arisheh town and al-Shaddadi city in the southern countryside of the northeastern province of Hasaka.

The army units destroyed ISIS positions in the surroundings of Ghweiran neighborhood and al-Villat on the southern outskirts of Hasaka city.

The Syrian Arab Army on Wednesday eliminated the last remaining gatherings of ISIS terrorists in areas and positions in the surroundings of Palmyra city in the eastern countryside of Homs province.

Army units established full control over Nazl Hayyal, al-Qadiri farm, and Thaniet al-Rajma to the west of Palmyra city after intensive precise operations against ISIS concentrations which resulted in the death of scores of terrorists.

Meanwhile, local sources told SANA reporter that operations resulted in killing 35 terrorists from ISIS, in addition to injuring at least 90 terrorists and destroying dens used by the organization’s leaders, along with dozens of vehicles equipped with heavy machine guns that were trying to reach combat zones to evacuate injured terrorists.

The Army Air force also carried out intensive airstrikes on dens and movements of ISIS terrorists in the surroundings of al-Heer Palace, Palmyra city, and its surroundings, killing a number of terrorists and destroying their arms and ammunition.

In the neighboring Hama province, dozens of terrorists were killed and their vehicles were destroyed in army air strikes on their gatherings in al-Latamneh, Atshan and al-Hweijeh in the countryside of the province.

Army units carried out on Tuesday and Wednesday morning intensive operations against dens of terrorists in al-Mukhiyam park and on al-Sad road in Daraa al-Balad neighborhood in the city of Daraa, according to the military source.

The operations left many terrorists killed and their arms and ammunition destroyed.

Another army unit repelled an attack by terrorist groups on military posts in separate areas in Daraa city, killing a number of them and injuring others.

In northern Syria, The army air force carried out a number of air strikes against positions of the terrorist organizations and their movements in the villages of Bishlamoun, al-Bsheiriyeh and in Jisr al-Shughour city in the countryside of Idleb province.

A number of terrorists were killed in air strikes and several their machinegun-equipped vehicles were destroyed.

A large number of terrorists were also killed, most of them from Jabhat al-Nusra, and their vehicles were destroyed in air strikes against their positions to the north and south of Abu al-Duhour airport and to the north of Khsheir village and Abu al-Duhour town.

A series of army air strikes left many terrorists killed in the town of al-Tamani’eh and in the villages of Madaya, Kinsafra and Shnan in the southern countryside of the province.

Earlier, units of the army killed scores of terrorists, most of them from Jabhat al-Nusra, and destroyed a number of their machinegun-equipped vehicles in the surroundings of the Scientific Research Center and al-Mansoura village, 10 km to the west of Aleppo City in the northern Aleppo Province.

An army unit carried out precise operations against dens and positions of the Takfiri organizations in Kwaires town and its surroundings in the eastern countryside of the province.

A number of terrorists were killed in the operations and their arms, ammunition, equipment and vehicles were destroyed.

Units of the army and the armed forces also destroyed positions of the ISIS terrorists on the International Road leading to Raqqa.

Another army unit killed all members of a terrorist group who were trying to infiltrate towards al-Zahra’a in the western outskirts of Aleppo and destroyed their arms and ammunition.

Another army unit launched strikes against dens and intercepted the movements of terrorist organizations in Maaret al-Artiq in Jabal Samaan area, Hraitan and Kafar Hamra to the north and northwest of Aleppo, killing a number of terrorists, injuring others and destroying vehicles, some of which equipped with machine guns.

A number of Jabhat al-Nusra terrorists were also killed and others injured in the neighborhoods of al-Jazmati, Bab al-Nairab and al-Rashidin in Aleppo city.

Meanwhile, Takfiri terrorist organizations admitted on their social networking websites that they suffered heavy losses and scores of their members were killed, including one of the field leaders of the so-called “Jund al-Islam.”